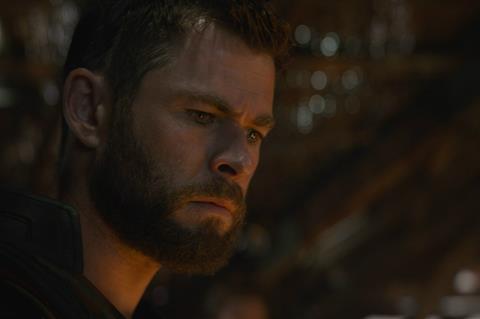 Avengers: Endgame has raced past $365m worldwide in its first two days including $305m internationally and a record $60m in North American previews, Disney brass said on Friday (26).

Disney sources are now saying a North American debut in the $300m range is possible based on “levels of presales and grosses not seen before after Endgame matinees on Friday were tracking towards a potential $14m-plus opening day including previews.

Internationally the $205m does not include China on Friday. Disney said the territory had delivered $154.5m by the end of Thursday, while Maoyan indicates the film has grossed RMB 1.7bn including Tuesday night previews, which amounts to more than $250m.

Endgame broke records in the UK, earning $15.3m from the highest industry single day of all time from the Thursday launch, some 86% higher than the opening day of Avengers: Infinity War last year.

In Latin America, the blockbuster has produced the highest industry single day in every market that opened on Thursday (Panama, Peru, Colombia, Argentina, Chile, Bolivia, Paraguay, Trinidad and Uruguay), and it crossed the same milestone in Europe in Portugal, Bosnia/Herzegovina, Czech Rep, Serbia (non-local), Slovakia, Turkey and Ukraine. There are new second highest industry opening day marks in Croatia and Hungary, and highest superhero opening days in Israel, Poland and Slovenia.

Endgame is opening on Friday in Mexico, Spain, India and Japan along with South Africa, Vietnam, Venezuela and Ecuador.