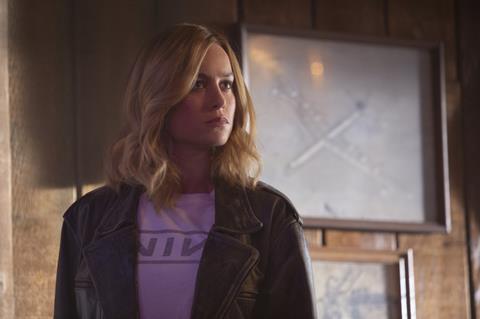 MARCH 11 UPDATE: Captain Marvel may not have thrilled critics as much as other entries in Marvel Studios’ 21-film canon, but the Brie Larson vehicle lit up the global arena with the sixth highest debut in history on a confirmed $456.7m.

From the other studios, both Fox International’s Alita: Battle Angel and DreamWorks Animation’s How To Train Your Dragon: The Hidden World (through Universal Pictures International) crossed $300m.

UPDATED: Opening everywhere except Japan on March 15, Captain Marvel scored the fifth highest international opening weekend and, as was the case with the global result, produced the second highest debut for a superhero film behind Avengers: Infinity War, and the biggest March release.

China delivered the top international result ($88.6m) as it so often does these days, in the third highest MCU gross in history behind Avengers: Infinity War and Captain America: Civil War. South Korea produced $24m for the sixth highest opening weekend. A $16.5m UK haul was good enough for the third highest March opening weekend. Black Panther opened on a Tuesday in the UK, yet the three-day weekend comparison is ahead by some 25%.

UPDATED:  Oscar winner Green Book brought in $28.1m through Lionsgate and Amblin Partners to reach $162.5m. The road movie starring Viggo Mortensen and Oscar winner Mahershala Ali brought in an estimated $8.3m from 54 Lionsgate markets for $69.1m. Japan has produced $6.8m after two sessions, France $11.7m after seven, Italy $9.6m after six, Russia $6.9m after seven, and Israel $2.2m after seven. Through Amblin Partners the film added an estimated $19.9m for $92.9m, powered by $15.4m in its second weekend in China after a 10% drop for $44.6m to overtake the lifetime total of La La Land.  Germany has produced $10.3m, while the UK has delivered $11m after six weekends through eOne, and Spain $8.2m via eOne.