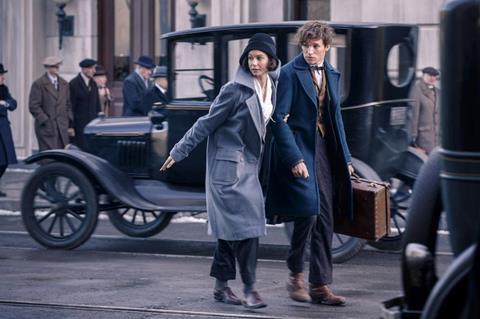 Venturing into an additional 16 markets on Friday, Fantastic Beasts And Where To Find Them plundered an estimated $30m to bring the international running total after three days including previews to $53.6m from 63 markets.

The tentpole debuted in the UK on $5.4m (£4.3m) from 1,880 screens to secure 84% market share of the top five and score the third highest opening day in the Wizarding World pantheon behind Harry Potter And The Deathly Hallows: Part 1 and 2.

NOVEMBER 18 UPDATE: The Harry Potter spin-off from Warner Bros stormed into an additional 38 markets on Thursday to boost the tally by $16.6m. After its first two days, Fantastic Beasts And Where To Find Them ranks number one in all 47 markets and stands at $23.5m through Warner Bros Pictures International, with a further 16 markets opening on Friday, among them the UK, Mexico and Spain.

Russia was the top debutant on Thursday on $1.7m (RUR 110m) from 2,602 screens for 77% market share of the top five and the second highest opening day from the Wizarding World films behind Harry Potter And The Deathly Hallows: Part 2.

Twelve Eastern European markets delivered $950k overall, with all-time number two opening days for Warner Bros in the Czech Republic and Slovakia  behind Deathly Hallows: Part 2 and the biggest opening day of the franchise in Ukraine.

NOVEMBER 17 REPORT: Warner Bros’ Harry Potter spin-off ventures out into the world this weekend when executives can confidently expect strong returns if the opening day in nine markets is anything to go by.

The Eddie Redmayne starrer and New York-set prequel to the hugely successful Harry Potter franchise generated an estimated $6.9m on Wednesday from 5,070 screens.

France led the way on $1.8m (€1.6m) and 209k admissions from 805 screens. The result included Tuesday night previews and resulted in 70% market share of the top five.

South Korea produced $1.7m (KRW 2bn) on roughly 1,090 screens in a non-traditional Wednesday debut that commanded 65% share and delivered the biggest opening day in what is known as the Wizarding World series encompassing the eight Harry Potter films.

Indonesia delivered $480k (Rph 6bn) from 690 and 75% share from what was also a non-traditional Wednesday launch that generated the second biggest Wizarding World opening day behind Harry Potter And The Deathly Hallows: Part 2.

The last of the notable Wednesday debuts came in Sweden where Fantastic Beast And Where To Find Them opened on $446k (SEK 4.1m) from 300 and 84% top five market share.

The fantasy adventure opens in a further 38 markets on Thursday including Germany, Italy, Russia, Brazil and Australia, followed by 16 on Friday led by the UK, Spain and Mexico.

Overall Fantastic Beasts will be active on more than 22,000 screens in 63 international markets this weekend day-and-date with the North American launch on Friday. Next week brings China and Japan.

David Yates directed Fantastic Beasts and is reportedly in line to helm the next four episodes after directing the last four Harry Potter films. Harry Potter author J.K. Rowling wrote the screenplay – her first ever for a Wizarding World film.