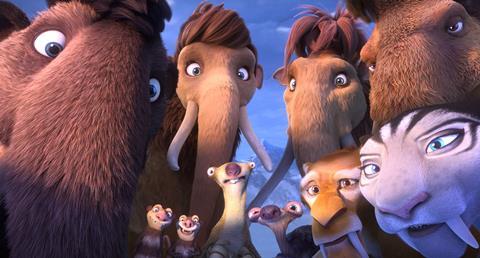 UPDATED: The haul boosted the running total for Ice Age: Collision Course to $126.7m after three weekends and secured number one slots in 35 markets. France led the way on $7m from 873 screens – a solid debut in what turned out to be a more robust market than expected in the wake of last week’s deadly Bastille Day attack in Nice.

Fox International scored its biggest second weekend in Argentina (and the industry’s third biggest second weekend), where $2.8m from 378 elevated the tally to $8.1m following a 32% drop. A $1.7m debut from 977 in India ranked third for the industry’s biggest non-holiday animation launch and executives said it exceeded that of Ice Age 4 by roughly 130%.

Ice Age: Collision Course debuted top in Spain on $1.5m from 837 and opened at number one in Turkey, where despite nationwide unrest caused by the failed coup it managed $546,817 from 551.

Independence Day: Resurgence grossed a further $16.6m from 73 and surged to $239.8m, led by a $6.4m number one homecoming for director Roland Emmerich on 1,134 screens that delivered the fifth biggest launch of 2016 so far.

The apocalyptic sci-fi has reached $16.6m after four weekends in the UK.

The quintessentially British comedy Absolutely Fabulous: The Movie climbed to $17.9m in the UK after a $1.6m haul from the third session, while Mike And Dave Need Wedding Dates added $2.2m from 21 for $7.2m after two weekends and stands at $3.7m in Australia.

UPDATED: Pixar’s Finding Dory added $38m in its fifth weekend for $277.8m from 45 territories. Overall the animation has grossed $723.5m worldwide, of which $445.5m comes from North America.

Argentina has produced $14.4m and South Korea an estimated $12.5m. The film scored a $9.6m debut in Mexico for the second highest Disney Animation or Pixar opening of all time behind Toy Story 3 with six weeks of summer holidays to leverage.

Finding Dory arrived in Japan on $7.1m from Saturday and Sunday ahead of Monday’s national holiday, and debuted in Hong Kong on $2.8m including previews.

In Brazil the film stayed top for the third consecutive session and ranks as the biggest Disney Animation or Pixar release of all time on $23.8m, contributing more than one-quarter of Latin America’s $80.5m running total.

Australia has produced $33.7m to establish Finding Dory as the top Disney Animation or Pixar release the second biggest animation of all time in the country behind Shrek 2.

Finding Dory is now the highest grossing Disney Animation or Pixar release in Slovakia, South Africa, Oman and the UAE.

The BFG added $3m to reach $17.3m from five territories, which equates to roughly 30% of Disney’s share of international markets, comprising the Asia-Pacific and Latin America regions. Mister Smith handled sales in the balance.

UPDATED: The Legend Of Tarzan used a $23.1m session from 55 markets to swing to $91.7m in a weekend that saw worldwide box office climb to an anaemic $194.8m given the stated $180m production cost.

The adventure delivered a $1.6m number one debut in Italy for a 60% market share of the top five. The Nordic region generated $4.8m overall, as Sweden produced $2.3m for number one and the lion’s share of weekend results, while France mustered apporximately $2.4m after a miniscule drop to reach $6.3m after two.

The breakout global romance Me Before You added $7.9m from 54 to reach $117.5m in its seventh weekend.

The UK lead the way on with a $5.8m number one performance from 1,050 screens for a new high-water mark for director Paul Feig. Studio executives reported the debut landed in the same range as those of Men In Black 3, Thor and Teenage Mutant Ninja Turtles.

The film arrived top in Australia on $3.6m from 493 and was said to be tracking on par with Men In Black 3 and Ant-Man and ahead of Teenage Mutant Ninja Turtles by 8%.

It opened in Brazil on $2.2m from 722 for another Feig milestone that opened roughly 11% ahead of Snow White And The Huntsman and 7% bigger than Rise of the Planet Of The Apes. It remained unclear whether the reference points in all cases had been adjusted for inflation.

The international performance appears on course to overtake the 2013 original’s $234m final international score and offers a welcome distraction from the disappointing run in North America, where the $64m tally will finish well short of the predecessor’s inflation-unadjusted final gross of $117.7m.

The mystery secured top berth in South Korea on $12.5m including previews, which executives said exceeded the original in local currency terms by 89%, although it was unclear whether the comparison takes inflation into account.

China drives the engine and the film has amassed $96.5m there and ranks as the 13th biggest release of the year-to-date. Now You See Me 2 ventures into Mexico and Spain this week.

UPDATED: New Line Cinema and Universal Pictures’ Central Intelligence took in $10m from 52 to push up to $63.1m.

The comedy opened in seven including table-topping results in the UAE on $1.3m and the Middle East on $1m. Australia is the top earner thus far on $10m, followed by the UK on $9.5m and Germany on $6.8m.

Illumination Entertainment and Universal Pictures’ The Secret Life Of Pets used a $4.4m session to vault to $50.9m from nine territories, an early score that will grow as the number one North American hit debuts in a further 57 in the next three months. The UK delivered $2.7m from 524 sites for $34.8m and the worldwide tally stands at $254.1m.

Teenage Mutant Ninja Turtles: Out Of The Shadows grossed $4.2m from 26 markets to reach $150.3m, powered by a third weekend in China that enticed $2.1m from film-goers for a $56.7m tally.