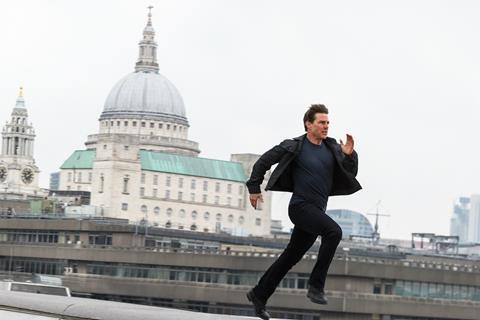 UPDATE: Now on $205m, the action spy thriller is tracking roughly 53% ahead of Mission: Impossible Rogue Nation for the same group of markets at the same stage. The global tally stands at $329.5m, less than half of the lifetime total of franchise leader Mission: Impossible – Ghost Protocol, which opened in 2011 and finished on $an inflation-unadjusted $694.7m.

On the back of a record-breaking July that generated $912m, Hello Mr. Billionaire followed up last weekend’s $127.3m debut with a $64.5m weekend haul that elevated the tally to $289.9m.

The animation debuted in Japan over five days on $8m (approximately $3.5m for the Saturday-Sunday portion), and arrived top in Spain on an estimated $4.5m, where Saturday’s gross registered the second highest ever for an animation. The family release has become the highest grossing Disney Animation/Pixar release of all-time in New Zealand as well as the highest grossing Pixar release of all-time in Taiwan.

Christopher Robin ventured into its first international markets day-and-date with North America and grossed $5.1m. Mexico took the lead on $1.5m over four days, while Russia generated $1.4m, Hong Kong $500,000, Philippines and Taiwan $300,000 each, and Singapore and Colombia each on an estimated $200,000.

After two weekends, Mamma Mia! Here We Go Again has amassed $3.3m in France. After three sessions it has grossed $6.9m in Spain, and $4.4m in the Netherlands.

Jurassic World: Fallen Kingdom has reached $855.1m after a $6.3m weekend, and is set to overtake Transformers: Age Of Extinction on $858.6m this week to rank as the 13th highest international release. The worldwide tally stands at $1.261bn.

Fallen Kingdom crossed $50m in Japan on Saturday to reach $51.7m, and in Mexico it has outstripped the lifetime total of Jurassic World.

Skyscraper added $5.6m from 66 for $123.7m excluding China, and $188.1m globally. Including China, where the action thriller has grossed $93.8m through Legendary East, the total international gross stands at $217.5m internationally, and $281.9m worldwide. Executives reported on a couple of Latin America territories, where Peru and Columbia have delivered $2.6m and $3m, respectively. The First Purge stands at $53.2m and $120.9m worldwide.

Latin America continues to deliver new territory lifetime records for the franchise with Mexico the latest to join the club in its fourth week reaching $24.1m. In other running totals, Brazil has generated $16.9m, Russia $16.6m, Australia $13.3m, Spain $11.7m, and Argentina $10.6m.

The Equalizer 2 raised the international running total by $816 from 11 markets to an early $7.7m as it prepares to launch this week in Spain.

UPDATE: YA dystopian thriller adaptation The Darkest Minds took in $4.1m in its first session, with Mexico emerging as the top market on $1m in a number five debut. Thailand delivered a $447,000 number two result. The film debuts in 14 markets this week including the UK, France and Spain. Mas Sabe El Diablo Por Viejo added $425,000 in Mexico for $2.3m after two weekends.