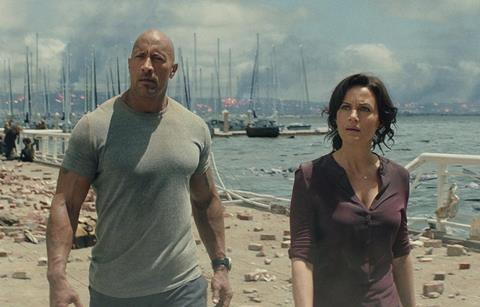 The confirmed $54.6m launch means San Andreas will make hay while the sun shines and has just under two weeks to generate the bulk of its revenue before the July 12 release of Universal’s Jurassic World is likely to bite a chunk out of its audience.

Overall box office for the top 12 slid 11.1% against last weekend’s disappointing Memorial Day Weekend, reflecting a thinner overall performance across the top five. The weekend tailed by approximately 18% the comparable session in 2014 when Maleficent opened top on $69.4m.

Last weekend’s champion Tomorrowland slipped 56.7% and two places to number three on $14.3m for $63.9m and has a long way to go towards recoupment give the price-tag, believed to be around $190m.

International continues to roll out and as usual will play a big role in helping the studio – in this case Disney – claw back its investment.

The story of Avengers: Age Of Ultron has been the complete opposite for Marvel Studios/Disney and the tentpole held firm at number five in its fifth week and stands at $427.1m.

Fox Searchlight expanded Far From The Madding Crowd by 37 theatres to 902 in its fifth session as the Carey Mullligan and Matthias Schoenaerts drama slipped one place to number eight on $1.5m for $8.4m.

Sci-fi drama Ex Machina has grossed $23.6m via A24 after eight weekends. Lakeshore’s Age Of Adaline has grossed a solid $41.5m through Lionsgate after six sessions.