The Jackie Chan action comedy ruled the waves at the weekend, plundering $62.3m in China as it ventured into six other markets via Bloom Media. 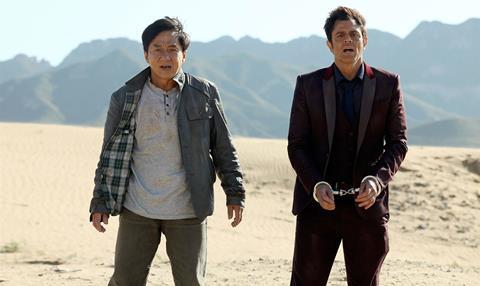 Shanghai New Culture Media Group, Talent International and Dasym Media co-financed the film and Saban Films will release in the US.

UPDATED: In contrast to its indifferent performance in North America, Warner Bros/Village Roadshow’s The Legend Of Tarzan is enjoying a solid run internationally, where it added a confirmed $45.4m from 61 markets to reach $146.3m.

UPDATED: Ice Age: Collision Course added $29.1m from 63 markets to reach $177.7m and soothe executives’ pain over the dismal North American debut. That said, top brass revealed the franchise has crossed $3bn worldwide to rank as the biggest animation series of all time.

Absolutely Fabulous: The Movie has taken $20.3m, of which $19.8m comes from the UK. Mike And Dave Need Wedding Dates stands at $9m and has grossed $4.5m in Australia.

UPDATED: Star Trek Beyond, the number one film in North America this weekend, grossed $30m from its first 37 markets, ranking number one in 16.

The UK led the way on $6.1m in second place, while Germany delivered a $4.5m number one debut.

Lionsgate-Summit’s Now You See Me 2 grossed $11.3m from 80 Lionsgate International markets as the mystery surged to $221.5m.

The film opened in Mexico in second place on $3.6m and also arrived at number two in Spain, where it grossed $1.2m.

South Korea has produced $19.7m after two sessions to rank as the second biggest market for the film behind China on $97.1m.

Illumination Entertainment and Universal Pictures’ The Secret Life Of Pets grossed $10.1m from 14 territories for an early total of $63.3m.

The animation scored a record-breaking $3.8m number one launch in Argentina that marked the biggest opening of all time for an animated film and the second biggest opening weekend for any film behind Fast & Furious 7.