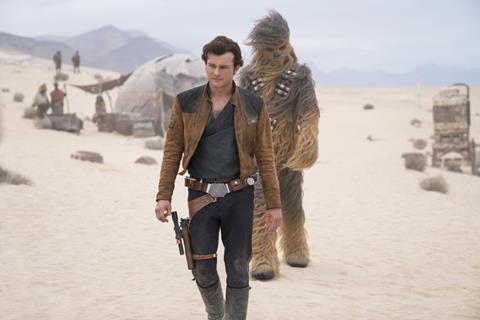 MAY 28 UPDATE: The latest release from Disney’s intimidating content stable has delivered a disappointing launch as Solo: A Star Wars Story took off with a confirmed $63.1m internationally that fell well below projections.

By Tuesday after the long memorial Day weekend in the US, Disney executives reported the tally had risen to $69.7m internationally and $172.7m worldwide.

The one positive note for Disney is the latest tentpole release pushed the studio past $4bn at the global box office for the year-to-date. The $4.12bn haul comprises $2.4872bn internationally and $1.638bn in North America.

Ron Howard took over directing duties after Lucasfilm fired Phil Lord and Christopher Miller and following the world premiere in Hollywood on May 11 and the international premiere in Cannes on May 15, reviews were by and large lukewarm.

Rogue One: A Star Wars Story – the first Star Wars spin-off – is the best comp and earned $1.06bn worldwide, of which $523m came from international and the $532.2m balance from North America.

Like Solo, that film also had a troubled production history yet critics were impressed with the end result and so were audiences. It opened top in China on $30.7m in January 2017, way ahead of Solo’s weekend launch.

Meanwhile Avengers: Infinity War added $32.5m for a $1.283bn international running total, and climbed by $49m to $1.904.7bn worldwide. It ranks as the fourth highest global release in history and the highest grossing superhero release.

John Krasinski’s acclaimed horror-family drama A Quiet Place added $4.7m from 36 markets as the running total surged to $131.7m. The film is impressing audiences in China, where $4.1m powered it to $27.9m after two sessions. The final two markets are France on June 20 and Japan on September 28.

Melissa McCarthy comedy Life Of The Party stands at $7.6m with Australia and the UK on $3.2m and $1.9m, respectively. Steven Spielberg’s sci-fi adaptation Ready Player One has reached $443.3m internationally and $579m worldwide. Game Night stands at $48m.