JULY 3 UPDATE: Jurassic World faces its sternest test yet as Terminator Genisys leaps to an early $28m heading into its first major weekend. Inside Out continues to build momentum and crosses $300m worldwide. 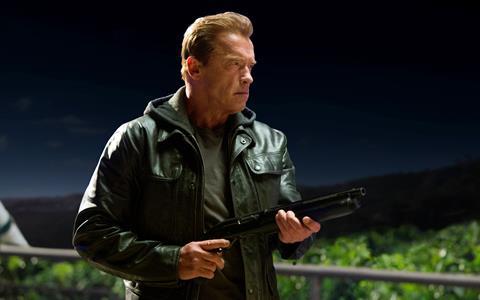 The Arnold Schwarzenegger sci-fi action from Paramount and Skydance Productions has vaulted from 10 to 38 territories and is now active in 10,326 theatres through Paramount Pictures International.

The film opens this weekend in Emilia Clarke’s native UK, as well as Mexico.

After three weekends atop the global box office the exploits of Jurassic World are well documented: Universal Pictures International’s smash stands at more than $750m internationally and $1.25bn worldwide.

The law of the jungle dictates that only the fittest survive and while there is plenty of life left in Jurassic World, it will have to fight tooth and nail to overcome Terminator Genisys.

Meanwhile it would be foolish to underestimate the might of Inside Out, which was poised to leap from its $97.9m perch to cross $100m on Thursday or Friday via Walt Disney Studios Motion Pictures International.

There are no new releases scheduled for the widely admired Pixar release and a typical staggered roll-out is the order of the day. The global haul already stands at a little over $305m.

There should be more foreworks too from the Chinese action-thriller SPL2 starring Tony Jaa on $72m.

In its second session, Universal and MRC’s Ted 2 opens in five smaller markets via Universal Pictures International and reached $20m by the close of last weekend.

Minions stood at $53.4m by the start of the week and arrives in roughly 16 territories including Germany, Spain, Argentina, Sweden and India.

Insidious: Chapter 3 has grossed more than $36.9m via Sony Pictures Releasing International and arrives in Germany, while Spanish rom-com Ahora O Nunca (Now Or Never) has reached $4m in Spain.

Sony’s local language Chinese co-production Monk Comes Down The Mountain (The Monk) from Chen Keige debuts in Australia and Taiwan. New Classics Media distributes in China and Sony handles the rest of the world. Annie arrives in Italy.

Spy has produced $108.1m via Fox International and Poltergeist $40.1m as it enters Italy. Guddu Rangeela opens in India.