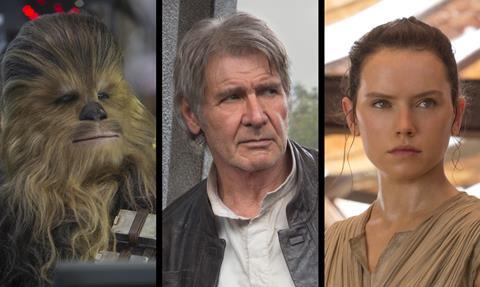 UPDATED: An opening salvo on more than 30,000 international screens saw Star Wars: The Force Awakens set number one debuts nearly everywhere and included a record four-day industry debut in the UK of $50.6m.

The tentpole established new industry three-day marks in Germany on $27.5m, Australia on $19.6m and Russia on $12.3m.

The latest Star Wars episode fell shy of Jurassic World’s $316.1m international record established in June, which included approximately $97m from China. It is primed for release there on January 9, 2016.

The space opera took $22.5m in France for the second biggest industry opening weekend of all time and $13.4m in Japan for the biggest debut of 2015.

The $11.4m launch in Mexico was the biggest ever in December, while $9.3m generated the third biggest opening weekend of all time in Spain, $9.4m in Italy scored the biggest December launch, $8.3m in Brazil delivered a record December launch and the industry’s third highest and $6.7m in Sweden produced a new industry opening record.

The film took $8m in South Korea, one of only two markets where The Force Awakens did not open at number one although it was the biggest Western release in both.

This weekend produced the biggest three-day launch in Poland, the biggest five-day debut in Denmark and further December records in Argentina, Hong Kong, Singapore, Malaysia, the Netherlands, Switzerland and Portugal.

Mojin - The Lost Legend swept to a spectacular $85m weekend while Surprise - Journey To The West added $24m that elevated the running total to $34m.

Spanish smash Ocho Apellidos Catalanes (Spanish Affairs 2) has amassed $30.6m after 31 days in Spain and consolidates it position as the biggest film of the year in the market. French comedy Babysitting 2 stands at $10.8m in France. Italian Christmas comedy Natale Col Boss opened on $1.4m in Italy.

Sisters opened in the UK on $1.8m including previews and rolls out everywhere in the coming months. Legendary and Universal’s Krampus added $1.8M from 42 territories for $12.8m.