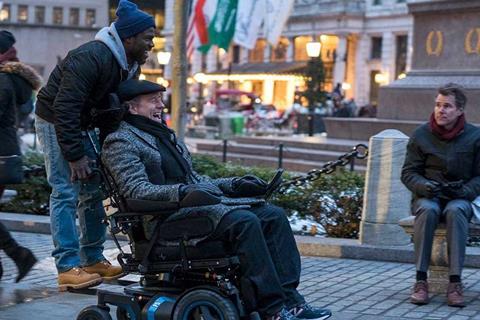 Kevin Hart’s high-profile exit as Oscars host did not appear to damage his standing among audiences, who rewarded The Upside with a table-topping result as it arrived in 3,080 theatres. The film is based on French smash Intouchables and tells of the friendship between a wealthy quadriplegic and his care-giver.

Languishing in the unfamiliar surroundings of number two, Aquaman dropped 44% on $17.4m for a $287.9m running total after four sessions. Last weekend’s champion Escape Room plunged 51% and three slots to number five in its second session, earning $8.9m for $32.5m via Sony.

Focus Features’ Ruth Bader Ginsburg drama On The Basis Of Sex starring Felicity Jones as the pioneering Supreme Court Justice and US national icon burst into the top 10 in its third weekend, climbing eight slots to number eight on $6.1m for $10.4m after expanding from 112 to 1,923 venues.

Disney’s Mary Poppins Returns crossed $150m in its fourth weekend as the family film starring Emily Blunt fell three slots to sixth on $7.7m for $151.1m. Spider-Man: Into The Spider-Verse was named best animated feature at the Golden Globes last weekend and is days away from crossing the same milestone after a $9m haul thrust the running total to $147.8m via Sony after five sessions. The distributor reduced the site count by 390 to 3,029.

SPC took advantage of the Golden Globes effect after Glenn Close won best dramatic actress for The Wife. The film experienced the greatest gain of all Globe winners in the session after expanding from 10 venues to 156, vaulting 22 slots to number 32. It gained 1,618.2% to add $111,853 for $8.3m after 22 sessions.

Fox pushed Bohemian Rhapsody into a further 254 theatres to reach 1,334. The Queen and Freddie Mercury drama won the best dramatic film Globe and stars Globe winner Rami Malek and ranks eleventh on $3.2m. It stands at $198.5m after 11 weekends and will cross $200m this week.