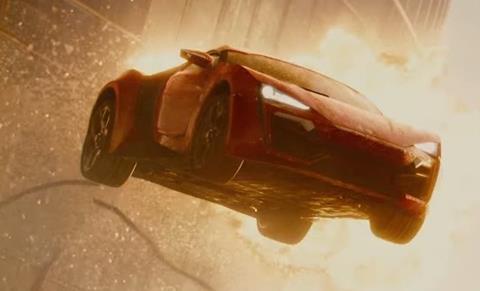 Until today Fox International reigned as the fastest studio to cross $2bn after it achieved the feat on June 15, 2010.

Now the spoils have gone to UPI thanks to a turbo-charged first half of the year that has seen an extraordinary $1.16bn haul from Universal’s biggest hit Fast & Furious 7, $403.6m from the studio’s biggest R-rated release Fifty Shades Of Grey and $90m and counting from Pitch Perfect 2.

And executives expect to improve considerably on the running total as they look to the summer and beyond.

Jurassic World is in the infancy of an international run that kicks off day-and-date with North America in 66 territories this weekend and has already generated $24.5m from a handful of locales on Wednesday.

Seth MacFarlane’s Ted 2 featuring MacFarlane and Mark Wahlberg will begin to roll out in late June and there will be high hopes the R-rated comedy can beat the $330m final gross of the 2012 original.

“Our continued success this year has been driven by the studio’s ability to build new franchises such as Fifty Shades Of Grey and to nurture our homegrown franchises, which include the Pitch Perfect and Fast & Furious series,” said UPI’s president of distribution Duncan Clark.

“We have benefitted from strategic dating choices, allowing our tentpole films breathing room to reach their full potential at the international box office.

“This was truly a team effort across the globe. We are proud to share this accomplishment with not only our leadership in London and Los Angeles, but with our local teams who worked tirelessly to make this one of the most exciting years in our studio’s history.”