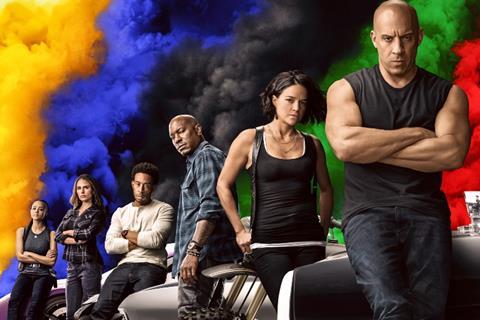 Universal’s international release strategy for Fast & Furious 9 is taking shape as the action tentpole will open in China on May 21 five weeks ahead of the US, with a cluster of other May releases in Russia, Korea, the Middle East, Hong Kong, Taiwan, Singapore and Vietnam.

Screen understands the strategy is to release the film in two waves of territories based on varying pandemic recovery levels across international markets.

China is the critical territory in the first tranche, given that it generates around 30% of international box office and has generated strong box office in recent months.

Studio executives believe audiences there, as in other markets, are ready to return to cinemas for the right film and the Fast franchise has been successful in those regions, with combined Fast franchise box office for the aforementioned markets delivering more than $1.6bm.

The second wave of Fast & Furious 9 territories will follow when they enter more robust recovery phases.

Fast & Furious 7, 8 and spin-off Hobbs & Shaw each grossed more in China than they did in the US in pre-Covid times. Five Fast films have opened in China, grossing more than 7bn RMB ($1bn).

In addition to being Universal’s biggest release ever in China, a “Fast Saga” film holds the record of Universal’s all-time biggest film in 27 markets including the Middle East, and most of South East Asia and Latin America, where it ranks as the second biggest franchise by admissions.

The positioning of the other markets besides China in the first wave is predicated on Covid recovery and the success of the franchise in those regions.

In the Middle East, Hobbs & Shaw, FF8, and FF7 are the top three Universal films of all-time, and the last two films in the franchise have each grossed more than $12m.