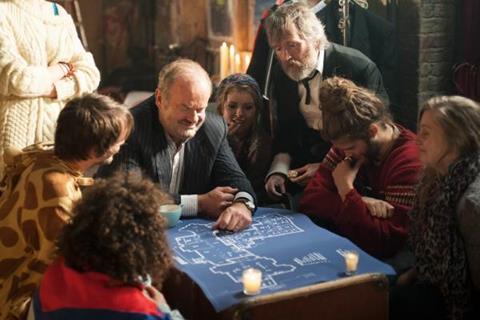 Kelsey Grammer puts aside his Stateside twangs in favour of a plummy English accent as he plays an engagingly dim-witted upper class toff who ineptly runs – and ruins – an old-fashioned and stately private bank in the freewheeling British comedy Breaking The Bank. The film, which had its world premiere at the Dubai International Film Festival, is blessed with a certain naïve charm, but despite the best efforts of Grammer and co-star Tamsin Greig this old-fashioned effort rarely clicks, with the muddled script offering nice ideas but little follow-through.

Kelsey Grammer has the right genial and bumbling charm as Charles and his relationship with Tamsin Greig’s well-to-do Penelope is the best aspect of the film.

The casting of Grammer and Greig (star of the US-set sit-com Episodes), as well as a nice performance from the ever-reliable John Michael Higgins, should make it of interest to international buyers, and while there is certainly a genial silliness to proceedings the promise is never fulfilled.

With his wife Penelope (Greig) the real power behind Tufftons Bank, the engagingly oafish Charles Bunbury (Grammer) is the affable chairman whose main job is not to muck up speeches and talk amiably to everyone. He knows nothing about banking, but when a bad deal by wide-boy trader Nick (Matthew Horne) leaves the bank exposed he finds himself dealing with bids from the US and Japan to buy into 200 year-old Tufftons.

To make matters worse, Charles makes the mistake of taking Nick’s insider-trading advice and invests money from his wife’s pension fun in a gas company in Nurgistan that ends up a disaster and with Tufftons having a paper loss of £2.5billion. Thrown out of house and bank, Charles wanders by the Thames and contemplates suicide, until he meets the homeless Oscar (Pearce Quigley), who happens to be secretly something of whizz in the markets.

With the aid of Oscar and Charles’ rebellious anti-capitalist daughter Annabel (Sonya Cassidy) the befuddled banker plans to turn the tables on Nick and the sly American banker Richard Grinding (John Michael Higgins) who has his eyes on both Tufftons and Penelope, and get back the venerable bank back into family hands.

There are some nice lines (when asked if he is a 24/7 sort of guy, Charles comments:” 24 hours a week, seven months a year”) and amusing moments (just as he is saying how up-to-date he is, his secretary comes in with his “emails to be signed” – sheets of paper on a silver tray with a quill), but it all feels rather familiar fare. Sonya Cassidy’s rebellious daughter role is poorly drawn and undeveloped; Matthew Horne’s champagne-swilling trader is a thin cliché, and Pearce Quigley’s tramp-cum-money expert needs more life to him.

Kelsey Grammer has the right genial and bumbling charm as Charles and his relationship with Tamsin Greig’s well-to-do Penelope is the best aspect of the film, but this comedy lacks the big laughs to really convince, though could likely be an easy-to-like success on home entertainment.