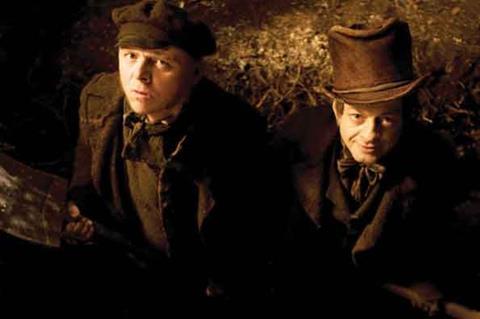 John Landis shakes hands with the Ealing comedy in Burke & Hare, a period pratfall-athon for the commercially-minded born-again UK studio. With a cast headed by Simon Pegg and Andy Serkis alongside a raft of Brit cameos, this defiantly silly dark comedy could connect with a UK crowd and it certainly has the feel of a Christmas TV staple. International travel is a challenge, however, as audiences try to figure out what’s so funny about Ronnie Corbett as the head of the Edinburgh militia.

There’s a certain air of fun here that gives Burke & Hare a charm which other recent Ealing offerings have lacked.

What Burke & Hare lacks in St Trinian’s sex department – it’s surprising producer, Trinians’ co-director and Ealing co-head Barnaby Thompson didn’t draft in some more girl power - is compensated with some surreal anachronistic touches (Wordsworth and Coleridge queue to get past a bouncer into 1828 Edinburgh’s hottest “club”).  Isla Fisher is spirited and may help overseas sales, but for the home market Burke & Hare could have benefited from a Cheryl Cole-style cameo to amp up Pegg’s and Serkis’s pulling power.

“This is a true story,” boast the opening titles. “Except for the parts that are not”.  In an old-fashioned rupture of the third wall, the town’s hangman (Bill Bailey) sets the scene for the arrival of William Burke (Pegg) & William Hare (Serkis), ne’er do wells from Donegal who conceive a scam to supply progressive surgeon Dr Knox (Tom Wilkinson) with fresh cadavers for his anatomy classes. Unfortunately, however, the scam quickly leads to murder to ensure the chain of supply.

Hare, with his conniving boozehound wife Lucky (Jessica Hynes), is driven by an entrepreneurial streak, while Burke is motivated by love for hooker-turned-actress Ginny (Isla Fisher) and a desire to finance her first all-female production of Macbeth. Meanwhile, across town, traditional surgeon Dr Monro (Tim Curry) will stop at nothing to scupper his rival’s progress.

Burke & Hare flings so many Brit cameos on screen that it quickly begins to feel like a Saturday night TV variety show – Hugh Bonneville, Ronnie Corbett, Christopher Lee, Paul Whitehouse, Michael Winner, Stephen Merchant, David Hayman – the list goes on. Even Greyfriars Bobby gets a bark. Apart from Jenny Agutter, it’s a very old boy roster, however, for a film that comes across as the love-child of Benny Hill and Mel Brooks.

Shot in Edinburgh and Ealing, Burke & Hare isn’t terribly Scottish and seems almost deliberately studio-bound, as if in homage. The accents are hilarious, in particular from Serkis, allegedly playing an Irishman, with Australian actress Fisher probably delivering the most consistent vocal performance. Admittedly, it’s all a trifle: silly, and commercial, and not very scary at all, but there’s a certain air of fun here that gives Burke & Hare a charm which other recent Ealing offerings have lacked.