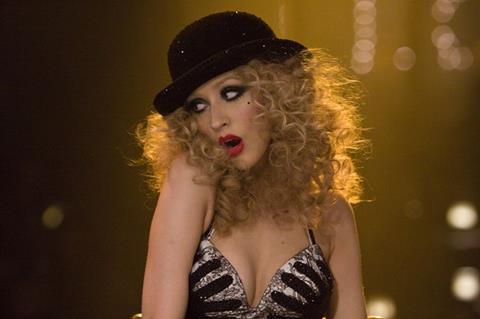 Campy, sexy and shameless in all the ways one would expect, Burlesque demands viewers acquiesce to its frothy, strutting A Star Is Born tone, and those who do are in for a hoot. This musical — the feature debut for both writer-director Steven Antin and pop star Christina Aguilera — puts several feet wrong when it comes to narrative ingenuity and character subtlety, but its exuberant spirit and some choice supporting performers make for a lively night out.

As for Cher, it’s a happy surprise that she gives a performance free of self-absorption, providing a comic zing to her wise-mother-hen role as the club’s owner and spiritual centre.

Hoofing it into US theatres November 24, Burlesque faces a crowded Thanksgiving line-up. Aguilera’s musical stardom is no guarantee for a film crossover, but if Sony can successfully sell the movie’s sass (not to mention co-star Cher’s first major role in many a moon), Burlesque may prove to be a guilty-pleasure alternative during the holiday season.

Just like many young hopefuls before her, aspiring Midwestern singer Ali (Aguilera) moves to Los Angeles to be discovered. Once in Hollywood, she finds The Burlesque Lounge, a club that offers song-and-dance numbers performed by sexy, scantily clad women. At first, club owner Tess (Cher) is unsure about letting inexperienced Ali join the show, but Ali’s stunning singing voice soon makes her the club’s main attraction.

For his first feature, Antin has mounted a razzle-dazzle production that at its foundation contains one of cinema’s most well-worn stories: a naïve-but-plucky talent who goes to the big city to find love and fame. Assisted tremendously by choreographers Denise Faye and Joey Pizzi, Antin stages much of the action within the club’s walls, where Ali and other dancers perform lascivious burlesque numbers seemingly inspired by the look of Moulin Rouge and the flash of Chicago.

Utilising a combination of older songs and original material, Burlesque’s dance sequences lean heavily on their colourful, cheeky moxie, as does the film as a whole.

Aguilera’s acting couldn’t be described as expert, but she adequately conveys Ali’s scrappiness, although it’s her singing and dancing that actually prove more problematic. As in her musical career, her burlesque performances (though flawlessly executed) come across as strangely inhuman, her total commitment to showing off her vocal dexterity such that it blocks any audience connection to her as a person.

As Burlesque’s conventional story rolls along — complete with rival love interests and a race to keep Tess from losing the club to creditors — it’s up to Aguilera’s supporting cast to keep the energy from flagging. And while some of the characters never rise above cheesy L.A. stereotypes, Stanley Tucci finds the perfect balance of sincerity and playfulness as Tess’s irreverent right-hand man.

Cam Gigandet possesses a flirty, hunky appeal as the club’s bartender, displaying great sexual tension with Aguilera. As for Cher, Burlesque is her first significant film role since 1999’s Tea With Mussolini, and it’s a happy surprise that she gives a performance free of self-absorption, providing a comic zing to her wise-mother-hen role as the club’s owner and spiritual centre.