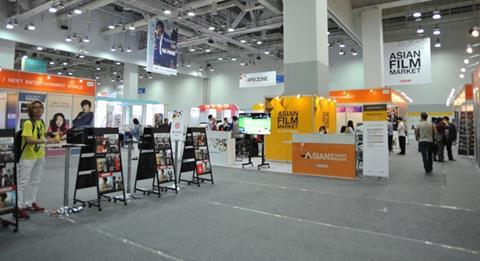 Although the market claimed an increase in exhibitors – 208 compared to 198 last year – foot traffic in the BEXCO exhibition hall was quiet and many sellers were packing up by lunchtime on the last day.

An oft-cited reason was the fact that the market is clashing with MIPCOM and preceded by holidays in both China and Korea.

The number of Hong Kong-Chinese sellers was down on previous years, although companies such as Toei, Nikkatsu and Gaga made the trip from Japan.

As in previous years, the busiest booths were the Korean sales companies and European Film Promotion (EFP)’s umbrella stand, which was packed with meetings for the first three days. Some of the region’s more prominent sellers also had back-to-back meetings and reported some sales.

“The best way to approach this market is to book your meetings at least a month in advance and don’t expect much foot traffic,” said Arclight Films’ head of Asian sales and acquisitions Elliot Tong. “It’s a great place for selling to Korean buyers and we also closed deals with India and Vietnam.”

Fortissimo Films, which is selling Busan closing film Mountain Cry, also had a busy meeting schedule. “It seems quieter than last year, but these things ebb and flow – timing is an issue as the market coincided with MIPCOM and Golden Week in China. But our market screenings for Mountain Cry and Closet Monster were well attended.” Werner said.

Hong Kong-based All Rights Entertainment, which has a large slate of Chinese animation, also said they’d been busy. “We didn’t sign any deals but we’ve had some real offers,” said Asian sales manager David Bauduin  “It’s a good place to meet smaller buyers that might not travel to other markets.”

The E-IP market also resulted in some genuine business – Korea’s Kirin Productions sold the Chinese IP rights to its web drama The Cravings to Beijing-based Alpha Transmedia. Kirin and Alpha plan to co-produce the Chinese version together.

Running alongside the Asian Film Market, the Busan Film Commission’s Asian Film Policy Forum debated a wide range of issues and invited EFP to present a case study on how it supports European cinema. Asian policy-makers discussed whether a similar model would work for Asia, although concluded it would probably need to be a private initiative, rather then government-led.

As in previous years, market delegates praised the smooth running of the event, which went off without a hitch, despite the budget cuts that hit the market and festival earlier this year. There was one aspect of the event that was widely congratulated by all participants: “The car shuttle service is the most impressive of any market in the world,” said Arclight’s Elliot Tong.