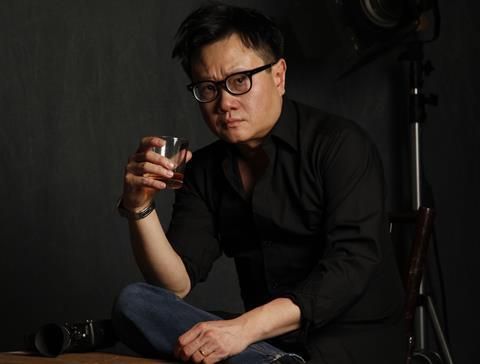 In The Room, which world premiered with a Love version specially edited for Toronto, and had its commercial theatrical release version make an international premiere in San Sebastian. Busan has the Asian premiere on Oct 3.

Khoo also has a segment called Cinema in the omnibus 7 Letters, which was made to commemorate Singapore’s 50th anniversary with Royston Tan, Jack Neo, Boo Junfeng, Tan Pin Pin, Kelvin Tong and Rajagopal K. 7 Letters yesterday made its international premiere in Busan.

I remember a few years back at the Bucheon International Fantastic Film Festival, you were telling me about wanting to do a love hotel film all set in one room. Did that become In The Room?

With all those love hotels there, I just suddenly thought about doing something all in one room. You know – “If the walls could talk…”

There was also an actual landmark hotel in Singapore, seven stories, built in the 1950s. When it started it was a great landmark with a view of the sea, but now of course the sea there has become reclaimed land and it became a real dive. It was demolished in 2008 to make way for the MTR. But it fascinated me.

I met up with the former manager and she started telling me all these stories that happened in the hotel. I thought what would be nice for In The Room was if we explored each decade and said something about each era.

This is my first shoot on a sound stage - at Mike Wiluan’s Infinite Studios. We were shooting basically 11 hour days, and you know what summer in Singapore is like. But it was great – air conditioning, no mosquitoes like on all my other shoots. I have B+ blood. The mosquitoes love me. Sometimes I like to surround myself with O+ crew because that’s the only type of blood they like better.

The shoot was really, really smooth. The great thing is the actors had their scripts, blurbs, everything down. The rehearsals were great and they had ideas to which I was receptive. We really didn’t have a lot of time, but they delivered. Everyone in the cast and crew gelled. It was a very nice, warm feeling. I guess because we were in that small space, it was intimate.

What we did was build mirror rooms so as we were shooting in one room, the art direction team would be doing up the next room. Each decade had its room.

I was going through a different era, almost like I was time travelling, every few days and then the shoot was over. I was kind of sad when it was.

What was it like to work with this multi-national cast?

A lot of them are foreigners. I was fortunate because many of them were able to communicate in English. I usually have a lot of time with the actors, but not so much on this film. We would Skype to go over the lines. We shot the film in ten days. It was hilarious. Actors would come [to Singapore], shoot the next day, then off they went. Then came in the next lot. Luckily everybody did so well. It was really a fantastic, joyous shoot.

How is this version screening in Busan different from the Love version that was in Toronto?

I got to do a special cut of the film for Toronto. That one has more of the love feel in it and it’s a little less wicked. Then the actual general releases version - that will surprise people even more.

This is your first time working with producer Nansun Shi. How did the project come together?

Nansun - we started drinking together at a lot of festivals. I really like her and wanted to work with her. But I do a lot of horror productions these days and she hates horror. When I was in Hong Kong, we stumbled on a topic we had in common. Films like Emmanuelle and The Story Of O, mainstream early and mid-70s. I guess that was in a way a sort of blueprint in my head. When I got to Bucheon with all the love hotels, it just started to grow. When she was in town in 2013 – I think because she’s on the Singapore Media Development Authority board – we met and I told her about this concept for In The Room. She said, “I really like it, let’s get it going.”

It’s the first film I directed as an international co-production.

It was wonderful working with Nansun. She reads the script, gives me really good points and helped with the casting. The film is financed by A Really Good Film – the new company with Jeffrey Chan and Nansun heading it up, and Distribution Workshop is distributing.

Tell us about Cinema.

Actually, it was this project for Singapore’s 50th birthday. All of us directors were told to do something for Singapore. I grew up on all these horror films that were in the 50s and 60s. When we used to make films in the 40s and 50s, it was always a Chinese producer, Indian tech crew, and the cast was always Malay. So it was almost all these races coming together.

That was back when Shaw Brothers were in Singapore and made all their early films there. All these movies that were produced were hits in Southeast Asia. All their budgets were bigger than today’s.

So Cinema was something from my childhood. Almost like a musical. We shot it in two and a half days. A lot of fun.

How many times have you been to Busan now?

Probably this time is maybe my fifth time. The beautiful thing about Busan is they showed all my films. There was one time I couldn’t attend, but this is my sixth film. They showed [my debut] Meepok Man. This 20th year for BIFF is also the 20th anniversary of Meepok Man. I was on the jury ten years ago when Be With Me was here, too.

What about when your son’s short screened in Wide Angle?

Then I’ve been six times! That was for Eddie, not for me. His short Late Shift. I felt really happy about it. “I’m coming for him, not me.” His new one will be done in June – a love story gone sour.