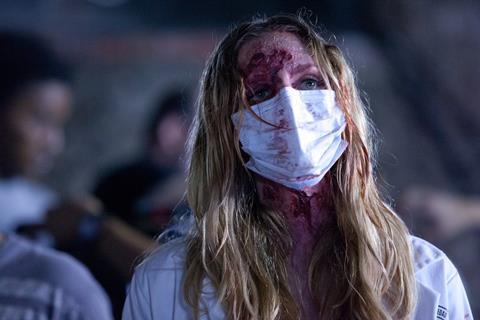 There is a certain gory familiarity to the third in the Cabin Fever series as bunch of frisky/boozy holidaying young folk come across bloody victims of a flesh-eating virus while on a holiday at a remote tropical island. Sex and violence go hand-in-bloody hand here, and while there are some nicely gory moments, the film feels rather uninspired…though as a home entertainment B-movie offering it delivers those handy genre movie marketing staples of boobs and blood.

There is a good deal of ‘acting-by-cleavage’ from those perky lab assistants which does detract from the so-so story at times, and while the make-up and gore effects are rather good the film offers little to a well-worn genre.

This third edition – hot on the heels of Eli Roth’s original and Ti West’s 2009 sequel Cabin Fever 2: Spring Fever – is pretty straight-forward fare, though is at least blessed with a couple of gross-out sequences that will keep gore hounds at least intrigued. The film just opened in the US for a limited release.

On a remote island in the Dominican Republic, Porter (Lord of the Rings star Sean Astin) is being held by a dodgy doctor (Currie Graham) and his unlikely bevy of beautiful lab assistants. It seems Porter is ‘Patient Zero’, an immune carrier of the nasty virus whose side effect is bloody projectile-vomiting and skin falling off bones.

Naturally it is onto this self-same island that a band of party-orientated youngsters decide to head. They are celebrating the upcoming wedding of Marcus (Mitch Ryan), with the gang also including Marcus’ brother Josh (Brando Eaton), his friend Dobbs (Ryan Donowho) and Josh’s girlfriend Penny (Jillian Murray).

Penny and Josh end up infected after a dip in the ocean, with their enthusiasm for sex post swim leading to a rather gruesome moment. The group then find themselves in contact with various victims of the virus – as well as Porter, who manages to escape – and have to try and find a way off this hellish island.

The dialogue and story are low-level stuff, with far too much exposition and not enough action, with the performance veering from nicely judged (Sean Astin) to standard B-movie stuff (the rest). There is a good deal of ‘acting-by-cleavage’ from those perky lab assistants which does at least cover up for the so-so story at times, and while the make-up and gore effects are rather good the film offers little to a well-worn genre. Though look out for the next sequel, Cabin Fever: Outbreak, coming to video screens soon.