'Can You Ever Forgive Me': Toronto Review

A change of pace for Melissa McCarthy 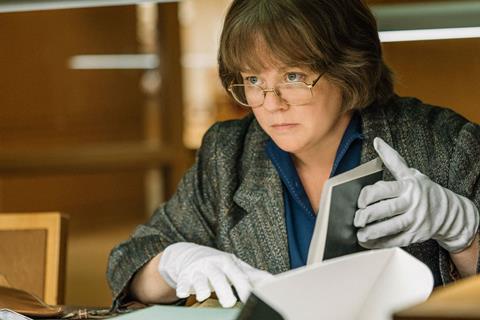 ‘Can You Ever Forgive Me?’

A true story about a total faker, Can You Ever Forgive Me? is a melancholy drama about deception, aging and failure. Melissa McCarthy bores into this look at Lee Israel, a biographer of some note who, out of desperation, decides to start creating counterfeit letters from renowned writers such as Noël Coward and Dorothy Parker, selling them to unsuspecting collectors. Following up her Sundance debut The Diary Of A Teenage Girl, director Marielle Heller is less interested in the machinations of Israel’s scheme as she is the psychology behind it, giving us a touchingly understated portrait of self-loathing and loneliness.

McCarthy captures both Lee’s unpleasantness and vulnerability, never asking us to sympathise with her character

Arriving in US theatres October 19 — it hits the UK in early February — this Fox Searchlight feature court awards consideration, no doubt advertising McCarthy’s change-of-pace dramatic role. Good reviews and the Oscar-nominated actress’ popularity should attract audiences, even if most crowds won’t have heard of Israel.

Based on the author’s memoir, the film takes place in the early 1990s in New York as former bestseller Lee Israel (McCarthy) is struggling with the fact that her recent biographies haven’t been as commercially successful. Facing financial hard times and socially awkward — her closest companion is probably her very old cat — Lee hits upon a new way to make money. Mimicking the writing styles of her favourite authors, she’ll craft typewritten letters in the voice of these dead writers, pawning them off to bookstores and memorabilia shops as genuine artefacts that her “cousin” found in his house.

McCarthy is best known for her broad comedic roles, but her rambunctious characters often convey a neediness or depression underneath their exteriors. In Can You Ever, she strips away the humour, playing Lee as a hard-working, beaten-down writer who feels it’s unfair that (to her mind) third-rate hacks like Tom Clancy are rich and famous simply because they have a persona. That’s why there’s a dark irony to Lee’s scheme: She’s made her living burying her own voice while amplifying the personalities of the people she’s profiled in her books — why not do the same through these forgeries?

Heller’s approach is gentle, even sympathetic, taking the time to show how Lee reached this point in her life. Unable to commit emotionally to people — including a kindly bookseller, Anna (Dolly Wells), who takes a romantic interest in her — Lee prefers to be closed off, lest she be hurt again, as she was by a former long-term girlfriend. With that in mind, it’s not hard to see why Lee would flirt with a life of crime: she has never thought enough of herself to believe that anybody would care about what she had to say in her own voice.

As Can You Ever rolls along, it becomes increasingly apparent that Lee’s forgery plot will get her caught, which is just as well considering that this narrative engine isn’t particularly riveting after its introduction. But rather than twists and turns, the movie offers several sly observations about our fascination with writers and celebrity — and our tendency to imbue any of their minutiae with significance simply because it comes from them, even if it turns out that it’s fake. Can You Ever’s commentary doesn’t draw blood, but its musings regarding our collective willingness to be duped are well-put.

McCarthy captures both Lee’s unpleasantness and vulnerability, never asking us to sympathise with her character. It’s a muted performance achieved without straining for effect. And she’s joined by a fine supporting cast, which includes Richard E. Grant playing a shabby bon vivant who bulldozes past her defences to become her drinking buddy and confidant. Also excellent is Wells as Anna, who sees value in Lee — even if this lonely forger doesn’t see any in herself.

Screenplay: Nicole Holofcener and Jeff Whitty, based on the book by Lee Israel