EXCLUSIVE: On the eve of his first visit to the Cannes Film Festival, European Commissioner Günther Oettinger has challenged the European film industry to deliver evidence supporting their calls for maintaining the territoriality principle. 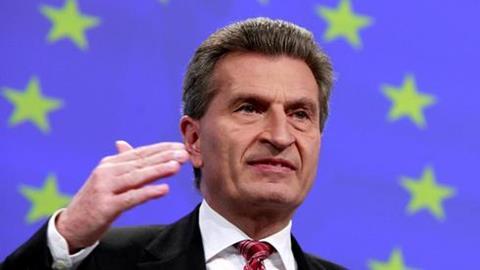 Speaking to European Parliament deputies after unveiling the Commission’s Digital Single Market (DSM) Strategy, Oettinger declared: “It’s up to the film industry to prove that they cannot survive with one market. I will give them the chance to do this in conversations, financial figures and in a market analysis.”

“There is an unprecedented existential fear,” he continued. “We will examine whether it is justified, but we must take it seriously.”

According to Oettinger, he is looking for “compromise solutions” or possibily “step-by-step solutions”.

“I want to integrate and not divide”, he said.

However, MEP Julia Reda of the Pirate Party, who dismisses the DSM  Strategy’s proposed anti-geoblocking measures as being limited to “roaming for Netflix”, countered that “if geoblocking is supposed to protect cultural diversity in European cinema, how is it that even the most successful European films are not legally available at all in most countries?”

“I tested this with the winners of the European Film Awards from the last 10 years. If these films are dependent on the financing through VoD rights in other countries, why are they not available?,” she asked.

On May 18, Oettinger will open the second edition of the European Film Forum in Cannes when discussion will focus on strategies for finding global audiences for European films. (ends)