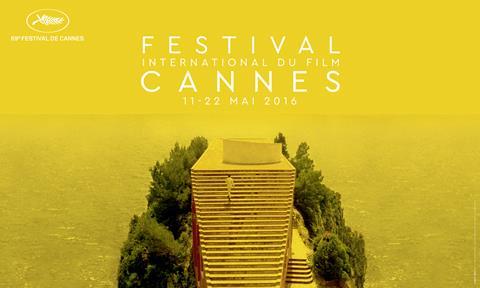 Less than a month before the full line-up is revealed, the poster for the 69th Cannes Film Festival (May 11-22) has been unfurled.

The poster, which will be emblazoned across the Palais and displayed throughout Cannes, usually features a close up of a film star and in recent years has featured Ingrid Bergman, Marcello Mastroianni and Paul Newman.

The poster was designed by Hervé Chigioni, who has overseen the festival’s posters since 2014, and his graphic designer Gilles Frappier.

Contempt starred Michel Piccoli and Brigitte Bardot alongside legendary director Fritz Land and Jack Palance. It is a symbolic choice for the poster as the film is about the making of a film. The story centres on screenwriter Paul Javal’s marriage to his wife Camille, which disintegrates during a movie’s production as she spends time with the producer.

A statement from the festival said: “With the release of Contempt in 1963, Jean-Luc Godard reinvented the rules of the silver screen and championed a new kind of film-making, based on cinematic mythology.

“On the eve of its 70th anniversary, by choosing to represent itself under the symbol of this simultaneously palimpsest and unambiguous film, the Festival is reiterating its founding commitment: to pay tribute to the history of film, and to welcome new ways of creating and seeing.

“The steps represent a kind of ascension towards the infinite horizon of a cinema screen.”

The line-up for the Cannes Film Festival will be revealed on April 14. Here are Screen’s predictions on who is in the running for selction.