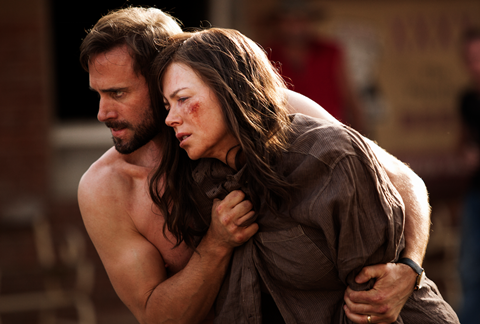 The director will attend the market to give an hour-long presentation of the film, which is due for delivery at the end of 2015.

“The film intertwines a contemporary tale of a little girl who discovers The Little Prince through a reclusive elderly neighbour,” said Wild Bunch’s Vincent Maraval.

The English-language voice cast includes Marion Cotillard (The Rose), James Franco (The Fox), Benicio del Toro (The Snake), Jeff Bridges (The Aviator) and Ricky Gervais (The Conceited Man). The voice of the little prince has yet to be revealed.

Crew on the film include character designer Peter de Sève, who worked on Ice Age, Finding Nemo and Tarzan, and Lou Romano, whose credits include Monsters Inc and The Incredibles.

“It’s made by animators who are the best in their fields,” said Maraval.

Wild Bunch has a long track record in selling animation, handling the catalogue of Japanese Hayao Miyazaki’s Studio Ghibli and more quirky fare such as Patrice Leconte’s The Suicide Shop, although The Little Prince marks its first studio-style animated title.

Paramount Pictures is planning a wide US release for the film and is also distributing in France. Warner Bros will release the picture in Germany and Japan. AR Films has taken Russian rights. All other territories are open.

Paramount executives will be in Cannes to unveil their ambitious release strategy. The feature is lead-produced by Dimitri Rassam and Aton Soumache’s Paris-based Onyx Films.

New York-based Worldview Entertainment is a key financier on the feature produced by Naomi Wenck of Australia’s Dragonfly Pictures and Macdara Kelleher of Irish-based Fastnet Films.

Kidman and Fiennes co-star as a couple whose teenage children go missing during a dust storm in a remote desert town in the Australian outback. Weaving plays the police officer in charge of the investigation into their disappearance.

It is a first feature for Farrant, whose works include the critically acclaimed documentary Naked On The Inside, exploring the relationship between the body and the inner self through six people. Wild Bunch handles world sales except the US, Canada, Australia and New Zealand.

Maraval and his team will also start sales on Swedish Mikael Marcimain’s feature Gentlemen and mini-series Gentlemen And Gangsters, an adaption by celebrated compatriot writer Klas Östergren of his own work.

Marcimain is best known for his 2012 film Call Girl, a political thriller inspired by a real-life prostitution scandal in Sweden in the 1970s.

Wild Bunch has also acquired sales on Gabe Polsky’s documentary Red Army, which will premiere in a special screening in Cannes.

The film, executive produced by Jerry Weintraub and Werner Herzog and to be distributed by Sony Pictures Classic in the US, explores the Soviet Union in the Cold War era through its hockey culture.

Other Official Selection titles on Wild Bunch’s slate include Palme d’Or contenders The Search by Michel Hazanavicius and Two Days, One Night by Jean-Pierre and Luc Dardenne, Goodbye To Language by Jean-Luc Godard, Jimmy’s Hall by Ken Loach and the out-of-competition entry Coming Home by Zhang Yimou.

The company is also handling Japanese Mayazaki collaborator Isao Takahata’s The Tale Of The Princess, which is screening in Directors’ Fortnight. It is Takahata’s first film in 14 years since My Neighbours The Yamadas.