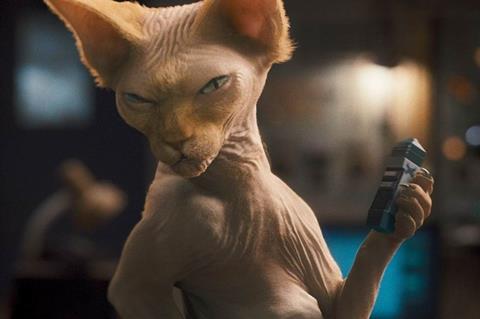 Lightly amusing but doggone derivative, Cats & Dogs: The Revenge Of Kitty Galore represents an all-too-familiar strategy for kids’ films, bombarding the audience with jokes, action and effects to produce an overstuffed experience that rarely enchants. Younger viewers will probably enjoy this 3D live-action tale of furry spies banding together to defeat an evil feline genius, but this sequel to the 2001 original doesn’t have the narrative ingenuity to sink its claws into you.

Kitty Galore’s silliness has its charms but the movie’s overall lack of ambition keeps the story from being memorable.

Kitty Galore will face a crowded US marketplace that features several family-film holdovers, the most potent of which remains Despicable Me. Theatrical longevity may depend on audience awareness of the original film, tykes’ seemingly inexhaustible love for talking animals, and moviegoers’ continued infatuation with 3D offerings.

Bringing back some of the characters (but not necessarily their voice actors) from the first Cats & Dogs, Kitty Galore doesn’t worry about being a traditional sequel, instead simply recycling the original film’s high-concept conceit of parodying James Bond-style thrills with talking animals. In addition to the nods to spy movies, first-time feature director Brad Peyton crams Kitty Galore with lowbrow references to buddy-cop films and The Silence Of The Lambs, while Ron J. Friedman and Steve Bencich’s screenplay is heavy with groan-worthy gags that recall the good-hearted humour of Jim Henson’s Muppet movies.

In limited doses, Kitty Galore’s silliness has its charms – especially when voice actors Katt Williams and Sean Hayes lend some bite to their supporting roles – but the movie’s overall lack of ambition keeps the story from being memorable. A combination of animal actors, visual effects, and animatronics help bring Kitty Galore’s cute critters to life, but as with the film’s use of 3D, the technique quickly loses its appeal once the film settles into being a genial mediocrity.