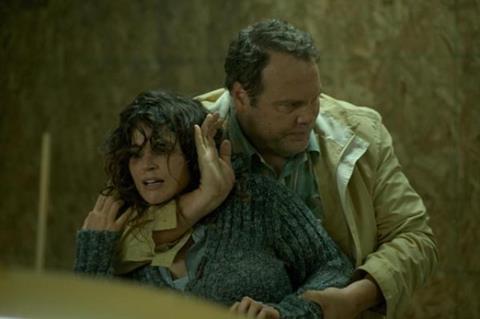 Though there was a 15-year gap between Jennifer Lynch’s debut feature Boxing Helena (1993) and her sophomore effort Surveillance (2008), she has become slightly more prolific, following up with the little-seen snakewoman horror film Hiss, a contribution to the anthology film Girls! Girls! Girls! and an episode of the TV show Psych.  Adding Chained to her resumé means that her filmography is starting to take on an auteurist feel, which is a mixed blessing since she carries over faults (notably, a preference for absurd, twist-filled final acts) from film to film as well as a set of thematic concerns (characters trapped in dependent relationships, serial murder) and a knack of getting fine work from undervalued character actors.

There have been a plethora of abduction, restraint, sexual torture, surveillance, serial murder and chained-in-the-basement movies in recent years and Lynch’s slightly higher-toned direction doesn’t really bring enough fresh to the overtilled field

In a scenario which parallels the recent direct-to-DVD downer Bereavement, serial killing cab driver Bob (Vincent d’Onofrio) snatches Sarah Fittler (Julia Ormond) and her nine-year-old son Tim (Evan Bird) after they’ve spent an afternoon at the movies and drives them back to his surreally isolated, bunker-like home.  He rapes and kills Sarah, traumatising the child, whom he renames ‘Rabbit’, but opts to keep on the boy (‘I didn’t ask for you’) as a slave, chaining him up and using him to clean the house and help bury the bodies under it.

Some years later, Rabbit (Eamon Farren) is still in thrall to the tyrant Bob, who takes it into his mind to mentor the lad and even has hopes that the fiercely-moral boy will join him in his pastime of murdering women he regards as disposable ‘whores’.  However, Rabbit has grown cunning … and there are a few added plot developments (some of which evoke Roland Joffé’s scarcely well-liked Captivity) to complicate the payoff.

D’Onofrio, who has played serial abductors before (The Cell), adopts a creepy lisp and is a fearsome presence, while the unusual-looking, fragile Eamon Farren is an interesting, ambiguous hero.  However, there’s a little too much special pleading as flashbacks to Bob’s miserable childhood of sexual abuse try to convey the atrocious murderer’s inner agony while his victims (even Ormond’s barely-characterised Mom) are a parade of nonentities whose fates sometimes involve misjudged comedy.

At the heart of the film is an interesting relationship between the killer and a lad who could be his disciple or his victim, but the script buries this in unneeded plot turns that make little sense and throw away the tension that has been built up by resolving its basic set-up before haring off in another direction as we get revelations about the original abduction.

It’s also a problem that there have been a plethora of abduction, restraint, sexual torture, surveillance, serial murder and chained-in-the-basement movies in recent years and Lynch’s slightly higher-toned direction doesn’t really bring enough fresh to the overtilled field. Chained had its world premiere at Montreal’s Fantasia Film Festival, and screens at the UK’s annual genre event FrightFest.

Screenplay: Jennifer Lynch, from a screenplay by Damian O’Donnell