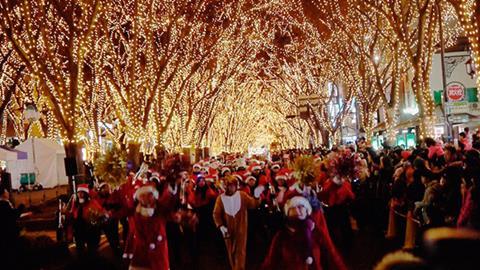 Hiroki Iwabuchi’s low-budget documentary into how his hometown of Sendai, famed for its annual Christmas Pageant of Starlight, recovered after the impact of the Great East Japan Earthquake is engaging in parts, but ultimately let down by a poorly edited structure and too much amateur-hour footage.

There are some tender shots of a friend of the director staging Christmas for his excited young children.

The on-the-ground footage of the delightful parade through the city and interviews with locals about how they embrace that time of the year work well, and it is inspiring to see how the town recovered after the earthquake, which saw much of the lighting and equipment used to stage the pageant destroyed.

The director sets his film up nicely with some early shots of happy faces of children and adults alike as the twinkling lights celebrate all that is good about that time of the year – he filmed in December 2011 – but then spends far too much time with poorly shoot footage from the local church which immediately slows down the pace and almost brings the film to an early abrupt halt.

Things do recover, and there are some tender shots of a friend of the director staging Christmas for his excited young children, but somehow what should and could have been a fascinating topic gets submerged in poorly sustained images and a rambling and unstructured format. The film had its premiere at the Tokyo International Film Festival.