The British director of The Arbor and The Selfish Giant revisited earlier short films and discussed their influence on her features. 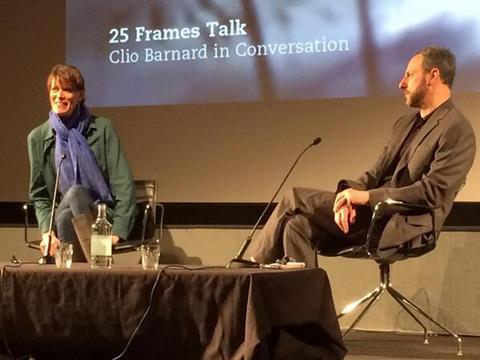 A look at early, experimental work from British director Clio Barnard highlighted a few clear connections between her shorts and features.

Back on the big screen at the British Film Institute (BFI) in London, Random Acts of Intimacy (1998) featured actors lip-synching to pre-recorded testimonies of fleeting sexual encounters – a technique Barnard would later use in The Arbor.

Road Race (2004) was originally presented as an art installation and documented illegal horses races conducted on a stretch of dual carriageway, which the director revisited in last year’s The Selfish Giant.

Audiences were also treated to Dark Glass (2006), filmed on a mobile phone in one, eight-minute shot, which visualises a woman’s description under hypnosis of family photographs.

Barnard took to the stage following the screenings to discuss her work with film critic Jonathan Romney.

“I didn’t sit and watch them just now because it makes me nervous,” said Barnard, but added that she had re-watched Dark Glass and The Arbor to choose clips.

“I was surprised by some of the similarities which I hadn’t necessarily seen before, such as the focus on the faces,” she said. “It’s not a fully conscious thing in terms of what the threads might be that pull the work together. Perhaps the purpose of doing something like this is to see what they might be.”

The director recalled that Akira Kurosawa’s Rashomon was a film that had affected her as a young viewer. “The idea that the truth is very unstable has had a strong influence,” she said.

“With documentary there’s an expectation it will tell the truth and that’s problematic. In a way, that’s what I was investigating by using verbatim sound and constructed images and putting those things together to draw attention to the fact that it’s unstable and you shouldn’t assume it is accurate and the truth – and yet we keep searching for it.”

Asked why she moved away from this more experimental work into narrative features such as The Selfish Giant, Barnard responded: “It wasn’t a conscious decision. When I made The Arbor, I met this boy and felt very compelled to tell a version of his story and marry it with the Oscar Wilde fairytale. It was a compulsion to do it.”

“That’s not to say I won’t make an experimental piece of work again. I may well do that. It just so happens at the moment I’m working on more features.”

Speaking about Road Race, Barnard recalled: “Part of what really interested me is that we think of a wobbly handheld camera and bad sound as authentic. But it seemed to me that the very carefully post-produced sound and very carefully shot road race actually gave a more realistic sense of what it’s like to be at a race so it’s that paradox that interested me.

“What I set out to do, but couldn’t do, was record just the sound of the race. Record verbatim audio and construct the images to that audio so it sounded very realistic but looked constructed. But when I finally got invited to a race, no-one would wear a microphone. People were really suspicious of radio mics. But if you got out a camcorder, that was fine because everybody had a camcorder.”

Moving onto Dark Glass, the director said: “It’s about family photographs. Mobile phones are how we keep records of our lives now. That’s partly what the piece is about. It seemed to be the most appropriate format on which to shoot.

“There’s something faintly ridiculous about spending an entire day shooting one very careful shot on a mobile. It’s not like we had a big crew. But they were all clustered around this mobile phone, which we had on the end of a hockey stick.

“It was incredibly carefully choreographed and even though it may not look it, it was really difficult to get it right. We only had one take that worked. That was at the end of the day. There was a problem because it kept whiting out and that would look like a cut so when the door opened we had to make sure the exposure was right. We had to work with all the automatic features so it didn’t look like there was a cut because it was a single shot work.”

Drawing a comparison with her latest work, Barnard said: “Like The Selfish Giant, I wanted to do something that seemed incredibly simple but if you begin to dig away it becomes more complex.

“Even though it’s shot on a mobile phone, I wanted it to feel like a hallucination and the things you might see in your mind’s eye under hypnosis.

“I’m interested in the idea that cinema is a collective hallucination and we’re desperately trying to create some kind of accurate representation of what we see in the world around us. I’m interested in the apparatus with which we try to do that and how inadequate it is.”

Talking about her upcoming work, Barnard said she would not use the documentary approach for which she has become known.

“I’m working on two things at the moment,” she said. “One is an adaptation of a novel called Trespass by Rose Tremain. The other is Polly Stenham’s screen adaptation of her play Tusk. Neither of them demands a documentary approach so I may way go back and do more of that at some point with these two projects that approach isn’t relevant.”