Why Hollywood needs to rethink Comic-Con

Content creators should bring more footage, more news, and a surprise or two. 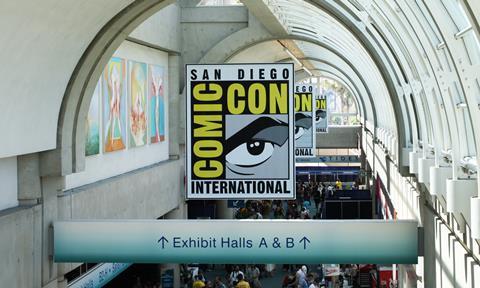 There was plenty of noise but little news at Comic-Con this year. In fact, away from the cacophony and cosplay, there was a distinct lack of genuine buzz emanating from Hall H.

Yes the Con bonhomie was in full bloom as hundreds of thousands of fans – many in extraordinary self-made costumes – swapped compliments and comics, enjoyed the sun, and swarmed into Hall H for the film and TV panels.

However what they got to see inside the hallowed 6,500-seat venue was often not enough. Industry attendees I spoke to struggled to pinpoint a single property that really stood out from the hype after four days of wrap-around screens, A-list celebrities and footage.

Entertainment executives can be hard to impress when they’re not touting their own content, yet the fans seemed to feel the same way. I had the pleasure of sitting among the great costumed masses – away from the press area – during Saturday’s Marvel Studios presentation. Once again, Marvel delivered the best film panel, but before the session started I heard lots of people say how this year was low on excitement.

Of course Comic-Con is a huge marketing platform, but film and TV executives need to show greater respect for the fans and, for their own sake, fight harder to stand out in San Diego before the merchandise, massive advertising wraps and immersive marketing ‘activations’ swallow everything up.

There was footage and trailers from the likes of Aquaman, Black Panther, Westworld, and Stranger Things 2. The footage was by and large terrific, but it was still not enough. Fox missed a trick with its panel, devoting the whole thing to Kingsman: The Golden Circle and not a mention of Deadpool 2 or the X-Men franchise, which returns in 2018. Similarly, HBO’s Westworld devoted too much of its session to banter and saved its best until last with a brief Season 2 teaser, by which time I noticed some people had left the room.

All these things are subject to the vagaries of production cycles, but if there is insufficient material to show, it might be better for executives to drop the trailer online and not turn up. Top brass at Paramount, Universal and Sony (big Sony – SPC brought Brigsby Bear) realised they had nothing to bring, so they skipped the show.

Or if they have committed to the time slot, the least Hollywood can do is spice things up with cast and project announcements, a sequence on production design or costumes with lots of imagery, or a one-on-one interview with a showrunner or director.

With the exception of Marvel, which kicked off its session with a volley of casting announcements that somehow had not leaked in the trade press and showed truly thunderous footage from upcoming tentpoles, the panels by and large were dull.

I understand that some executive thinks watching the cast tease each other or ponder what they would do if their character ruled Westeros deepens the bonds between talent and fans, but how many times are people expected to sit through 30 minutes of inane banter before they begin to feel a little cheated? Speaking of Westeros, the Game Of Thrones panel was a huge disappointment. Maybe Emilia Clarke, Peter Dinklage, Kit Harington and the showrunners sensed it would be so and decided to stay away.

The Comic-Con and broader fan communities are famously knowledgeable and passionate, completely in thrall to alternate worlds that lend themselves perfectly to the visual medium. They deserve to see more visuals. On that note, few properties promise more wonder than Blade Runner 2049 and Ready Player One. Each deserved their own panel, yet the Warner Bros hierarchy gave them relatively short shrift in order to get to the money – the DC Entertainment section – where there was nothing new besides brief first-look Aquaman footage from the Australia set.

There were no surprises at Comic-Con. Netflix sneaked the first episode of The Defenders, its upcoming series with Marvel that airs in August. People lapped it up, although many in the crowd predicted they would get to see it during the panel.

It’s time Hollywood rethinks how to engage with fans in a way that will weather the multi-platform storm. Maybe next year someone will introduce a film or series nobody outside the companies involved knew existed. That would get tongues wagging and bring back some of the Hollywood sparkle.