Alfonso Cuaron and Atom Egoyan talked about their new films before gala screenings at the Zurich Film Festival. 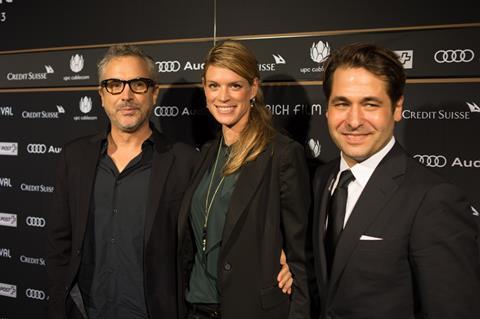 Mexican director Alfonso Cuaron took his time walking the Corso Cinema’s ‘green carpet’ meaning the gala screening of Gravity at the 9th Zurich Film Festival was delayed by more than half an hour.

But it was worth the wait. There was little sound from the rapt 750-strong audience, which appeared to hold its breath throughout the 3D space thriller starring Sandra Bullock and George Clooney.

There was, however, some warm laughter when Clooney’s character asked Bullock’s what she would usually be doing at 8pm at her home in Lake Zurich. The 8pm screening was just a stone’s throw from Lake Zurich (not to be confused with the US village to which the film refers).

Before the film, Cuaron took to the stage to introduce Gravity, which took him more than four years to make and has been generating Oscar buzz since its debut at Venice.

“My brother reminded me a few months ago that, when I was a kid, I said that if I couldn’t be an astronaut, I would make films about space,” recalled the director.

Cuaron responded: “It’s very flattering. Early in the process when everyone said the movie was impossible to make, [Cameron] was the one who said I could. He said we would have to invent the tools but could make it.

“He offered some ideas and actually offered help but I didn’t have the budget. Two months ago I bumped into him in Mexico City of all places. We go for dinner and he said: ‘You see, I told you that you were going to make it. What I didn’t tell you is that your hair was going to turn grey.’ He added: ‘You see this grey hair. That was Avatar!’”

Before praising ZFF co-directors Nadja Schildknecht and Karl Spoerri for “creating a fundamental destination for a film festival in such a short time”, Cuaron revealed his eight-year-old son’s review of Gravity.

“The opening’s awesome, then I fell asleep and the end is pretty good.”

The response to Atom Egoyan’s Devil’s Knot was more reserved, likely due to the dark subject matter of the true story in which three teenagers are put on trial for the murder of three young boys.

There were several walkouts well before the end, but this could have been due to the delayed screening which pushed past midnight.

Speaking before the film, which features an ensemble cast including Reese Witherspoon and Colin Firth, the Canadian director held back on offering spoilers after a show of hands revealed that the majority of the audience were unaware of the real life case of the West Memphis Three.

“In some ways it’s the ultimate murder mystery,” said Egoyan. “The film will work for you in a very different way if you know nothing about the story. But what happened in this community 20 years ago is extraordinary. It was deeply mysterious.

“There’s no perfect way of telling this story because it’s so complex but everything you hear is verbatim, based on transcripts.”

Asked if there was ever a consideration to exaggerate the story and create a “happy ending”, Egoyan said: “There can’t be a happy ending because that’s not there in real life. It continues. A happy ending would be a false telling.

“We were very conscious of tone. It moves from naturalism, to horror, courtroom drama and then something else. The language is conventional at first but then does something more radical than anything I’ve done in any of my movies in terms of how films are meant to end.”

Egoyan added praise for Firth, who has won a Best Actor Oscar (The King’s Speech) since they first worked together on dark Hollywood drama Where the Truth Lies in 2005.

“He’s an exceptional presence,” said the director. “He mainly watches and observes in this film but there’s a compassion to him and something empathetic. There’s also intelligence and a critical distance he has. He’s a rare actor that way.”

Egoyan wrapped things up with a challenge for the audience. “I want the audience to think about what they expect as viewers,” he added.

“There’s a certain way this film goes and you expect it to do something and when it doesn’t, it makes you wonder about your role as a viewer and how much of the story you expected to be given and how much do you develop in your own imagination.”