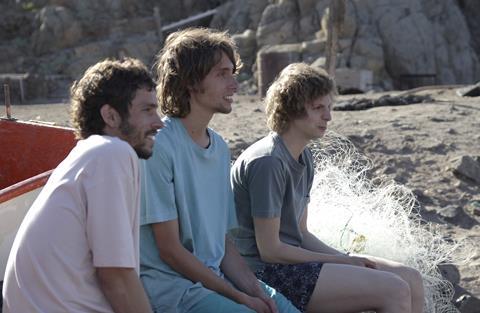 The complete title for Sebastian Silva’s improvisational lark, Crystal Fairy & The Magic Cactus And 2012 more accurately represents this curious goof of a movie. Slighter than the filmmaker’s acclaimed The Maid, which won a Sundance Jury Prize in 2009, but not to be completely dismissed, Crystal Fairy concerns the misadventures of a young American in Chile (Michael Cera), three Chilean brothers (played by the filmmaker’s own brothers), and a freewheeling hippie-girl named Crystal Fairy (Gaby Hoffman) who set out on a quest to a find a special cactus that, when boiled down, becomes the powerful psychedelic drug mescaline.

Director Silva is after something deeper than a mere drug movie, touching upon the fine lines between the fronts people put up and who they really are, as well as a plea for tolerating other’s differences.

With the comic antics of Cera (Juno, Superbad), director Silva’s rising profile, and the film’s druggy logline, Crystal Fairy will likely receive some level of limited exposure in international territories, but it won’t be blowing anyone’s mind.

When we first meet Cera’s Jamie, sporting an afro-like ball of curly hair, he appears obsessed with the mind-altering powers of whatever drugs he can get his hands on, from Chilean weed to cocaine to the crème-de-la-crème, the titular “magic cactus” plant known as San Pedro. At a party with his friend Champa, he spots the wild and wooly haired Crystal, all necklaces and bracelets, dancing around like a ’60s flower child. Though embarrassed by her dancing, Jamie can’t resist confronting her, and soon finds himself, in a drug-addled high, inviting her to join them on their road-trip.

The following day, sobered up and far crankier, Jamie’s attitude towards Fairy changes from wonder to hostility. He keeps trying to convince his friends to leave her behind, and exudes a sardonic distaste for Crystal’s spiritualist ways. In one hilarious sequence, Crystal emerges completely naked from the shower into a small hotel-room, while the four young men watch in mild shock and discomfort as she deposits “magic” rocks in their beers. With a reference to her pubic hair, Jamie takes to calling her “Crystal Hairy.”

Another humorous set piece sees the hopped-up Jamie clandestinely chopping off a piece of the Magic Cactus and awkwardly running down the street with the treasure cradled in his arms. Wearing white shorts and dark socks, which emphasise his lanky pale frame, Cera recalls a young Woody Allen, lending a healthy dose of physical comedy to the proceedings. After the gang finally manages to consume the prized mescaline, Cera again delivers moments of supreme bodily humor, whether holding himself in sickly repose or running down the beach like a flailing pelican.

Gaby Hoffman’s Fairy is also a comic persona, whether running naked through Chile’s rocky terrain or doing strangely extreme Yoga exercises on the beach. The actress is perfectly relaxed and unselfconscious in the role, both requisitely outrageous but also capturing the character’s counter-cultural ways with a hint of awareness for their absurdities. Later in the film, Hoffman exposes herself in more profound ways, delivering a painful monologue about the character’s past trauma.

Indeed, Fairy is not all drug-fueled laughs. Director Silva is after something deeper than a mere drug movie, touching upon the fine lines between the fronts people put up and who they really are, as well as a plea for tolerating other’s differences. Despite the central conflict between Jamie and Fairy that drives the narrative, Silva suggests the two eccentrics are probably more alike than different.

While the themes aren’t entirely fleshed out, they give a little more weight to a movie that is ultimately a light diversion. One can probably expect more from Magic Magic, the director’s psychological thriller, which also stars Cera, and is premiering at Sundance just a few days later.