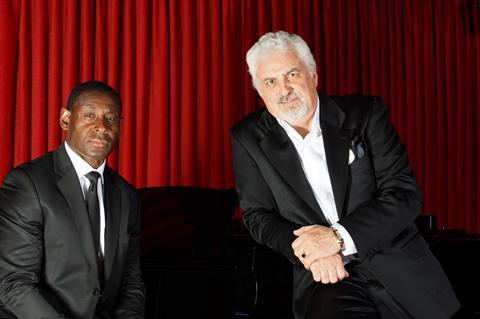 British veteran of stage and screen David Harewood won armies of fans with his portrayal of ice-cool CIA director David Estes in the US TV smash Homeland. During a whistle-stop tour of Los Angeles, Estes tells Jeremy Kay about his passion for Robeson, the upcoming biopic about the early 20th century actor, sportsman and Civil Rights activist Paul Robeson.

Richard Akel, president of LA and Auckland-based Four Stars International, co-wrote the screenplay with Terry Bisson and is producing with his partner Janice Hammond in association with Canada’s Sienna Films and Greg Carter.

David first of all, congratulations on Homeland. How do you feel after two seasons on the Golden Globe-winning drama?
David Harewood: It’s been great working on a terrific show. I spent two years working with great actors and I learned the craft of American screen craft, which is very different from UK stagecraft. [Estes] was a very underwritten role. I was one of the only characters in the show who didn’t have an emotional life. I am very proud of it and of the cast.

How did you hear about this project, Robeson?
DH: About 15 years ago I came across Paul Robeson and buried myself in biographies and found out what I could about him. We’re all familiar with Martin Luther King and Malcolm X and the Civil Rights movement, but I had no idea that what predated this was this extraordinary figure.

When Richard originally sent me the script I had been shooting Homeland and I very unconventionally circumvented my agent and went straight to Richard. I told him I would walk across broken glass to play this man. I have played Martin Luther King on stage and Mandela on screen but this would be the pinnacle.

Tell us about Robeson
DH: I’m amazed how many people go ‘Who?’ He was a Renaissance Man. He was the third black person to attend Rutgers University he was an all-star football player. He was a great orator and won many awards at university. He completely confounded the idea that blacks were in some way less than whites.

He towered above his peers not only on the field of play but also in the classroom. He was a lawyer and very well travelled, associating himself with the struggle of downtrodden people all over the world. He was a first-class actor and singer – there was nothing he could not do.

He was a first-class American and it’s extraordinary that a movie hasn’t been made before. He gave his life to bring to life the struggle of black people, not only in the South but across the world.

How will the story be told?
DH: We’re going to use a linear story model, so both myself and the actress playing my wife will have to age into our 50s and 60s, so it’s going to be a real challenge.

You’ve just shot The Third Person for Paul Haggis alongside Mila Kunis and Liam Neeson. What else are you up to?
DH: I’ve been working in the UK for 27 years. Hollywood has put my name on the map and I am very excited to see what the future will hold, but this is the project I am most excited about.

When do you hope to shoot Robeson?
Richard Akel: The goal is to shoot this in August in Toronto and Montreal. We are in confidential discussions with a director and a star to play Robeson’s wife Essie.

What has Four Stars International got on its production slate?
RA: We have a General Eisenhower project called A Grand Affair, a film about the friendship between Hemingway and Tennessee Williams called Havana Rendezvous, a World War II Douglas Bader and Adolph Galland film called Sky Warriors and a film about a German Jewish doctor who worked in birth control during the days of the Weimar Republic called Aphrodite’s Doctor.