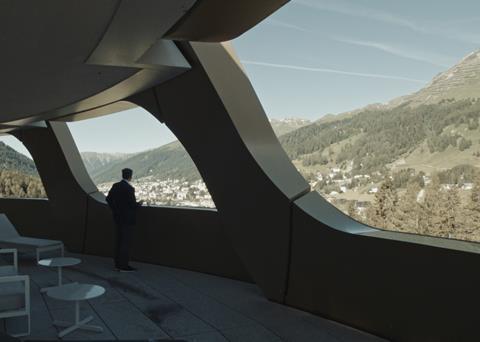 The World Economic Forum is held annually in Davos, Switzerland — and in the process, the name of the unassuming town has become synonymous with the high-powered summit that takes place there. Intriguingly, Daniel Hoesl’s observational documentary asks us to consider the community, and not the conference — focusing on the farmers, fishermen and bartenders whose lives have nothing to do with the WEF but whose livelihood (like everyone’s) is very much affected. Davos spends the majority of its running time dropping in on everyday people in Davos, then juxtaposing their modest existences with the spectacle and high-minded talk at the summit. More intellectual than emotional, the film may have an obvious point, but Hoesl makes it effectively: The global elite and ordinary citizens may reside in the same sphere, but they live in vastly different worlds.

Hoesl and Niemann seem sceptical about the capacity of those who live in ivory towers to learn empathy for the less-fortunate.

Premiering at Visions du  Réel, Davos will attract politically-minded viewers, as well as those engaged by economic issues such as globalisation. (The film also serves as a handy time capsule to current events, including Brexit and Donald Trump’s presidency.) Davos’ unobtrusive approach could invite comparisons to the master of the form, Frederick Wiseman, and may strike a chord with festivalgoers who, when attending Sundance, Cannes or Venice, spare scant thought for the locals who populate those communities year-round.

Hoesl and writer/co-director Julia Niemann filmed for about 18 months, chronicling Davos locals during a typical day. A family of farmers raises cattle and worries about the future. A group of fishing buddies gather for a good time. A museum curator educates tourists about Davos’ cultural history, including the fact that it was the setting for Thomas Mann’s acclaimed novel ’The Magic Mountain’. Meanwhile, the World Economic Forum takes place as panels are convened, heads of state arrive, and scores of journalists report breathlessly on the exclusive summit.

Anyone curious about the inner workings of the WEF will be disappointed since Davos has no desire to be a behind-the-scenes look at the much-hyped conference. (That said, the rare glimpses that Davos does provide suggest the smugness and elitism of the event.) Rather, the filmmakers brazenly contrast images of average Swiss citizens with the summit’s slickness so that we note the imbalance and also the hypocrisy. If the WEF is meant to improve the economic conditions of people around the world, why then do its invitees seem so detached from the hardships of ordinary people?

That’s a didactic thesis, but Davos is unapologetic about its blunt messaging, resulting in a documentary that will probably work best for those already understandably enraged at income inequality, global warming and corporations’ indifference to the plight of its workforce. Hoesl and Niemann don’t so much develop their argument as they repeat it, devoting the first half of the film to locals and then finishing the movie at the WEF, inviting us to be repulsed by the opulence and obliviousness.

It might have helped if the filmmakers had managed to more fully sketch out the Swiss locals they document. The documentary features no direct-to-camera interviews or even title cards explaining who these people are, which requires us to piece together this information. We simply eavesdrop on intimate conversations — and, tellingly, they are almost never about the conference or even politics. Davos’ most engaging individuals are the members of that family farm — particularly when the aging parents have a conversation with their adult children around the dinner table about who will take over once they’re gone. It’s a rare moment in which we feel that we truly get to know any of these Davos locals as more than “common man” abstractions.

That same shorthand occurs during the WEF scenes, although a few snippets of well-dressed captains of industry talking confidently about the value of corporations should be enough to make viewers squirm. Here, Davos includes both attendees and demonstrators, illustrating the tension between haves and have-nots in stark terms. Memorably, the filmmakers even chronicle a bizarre role-playing exercise in which the attendees “play” immigrants being detained, a bit of make-believe meant to stir their consciences. But as Davos makes clear, Hoesl and Niemann seem sceptical about the capacity of those who live in ivory towers to learn empathy for the less-fortunate.

‘Davos’ pkays as part of the International Feature Competition between April 25 and May 2 on www.visionsdureel.ch