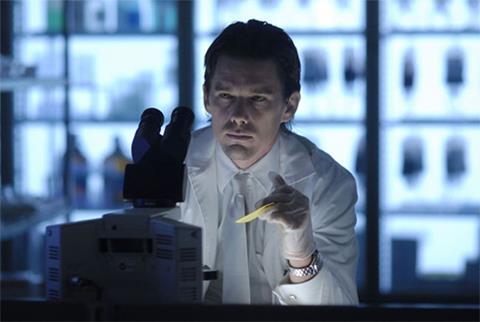 Improving significantly on their unimaginative 2003 zombie-horror debut, Undead, Australian film-making brothers Michael and Peter Spierig turn their attention to vampires with Daybreakers, their satisfying if still flawed follow-up. Boasting a better effects budget, better cast and, most critically, a much better screenplay, Daybreakers imagines a not-too-distant future when humans have become a small minority on a planet overrun by bloodsuckers.

Even if the premise turns out to be juicier than the payoff, this sci-fi/horror thriller suggests the Spierig brothers’ future might be much brighter than the luckless mortals’ inhabiting their tense new film. After premiering at Toronto, Daybreakers opens domestically January 8, 2010, well after November’s Full Moon has capitalised on the vein opened by Twilight’s $384m last year.

While vampires are hot business right now, the B-movie instincts of the Spierig brothers should see Daybreakers appeal to genre buffs more than general filmgoers.

In the year 2019, vampires rule the landscape, forcing the few remaining humans into hiding lest they be harvested for their precious blood. One vampire, a scientist named Edward (Ethan Hawke), is working for a company developing a blood substitute when he meets up with a small band of human outlaws led by Lionel (Dafoe) who enlist his help on a cure for vampirism.

The Spierig brothers’ first feature, Undead, was a meagre homage to George A. Romero’s classic zombie movies, substituting uninspired ironic humour and gross-out laughs for genuine terror. With Daybreakers, their cinematic reference points are still easy to spot – this time it’s the dystopic futures of Blade Runner and Minority Report – but the writer-directors have abandoned cheap laughs for a tenser tone and more thoughtful approach.

Daybreakers draws much of its strength from its well-developed future society, absorbing the viewer in a fluorescent-light world that has been adapted to suit the nocturnal needs of vampires.

Though it’s unlikely Daybreakers has a budget to match most contemporary Hollywood sci-fi films, the brothers make good use of their money to create a disturbing urban nightmare.

Thematically, the plot points concerning the panic that ensues from a worldwide blood shortage draw obvious parallels to oil dependence and third world poverty, while the film’s treatment of on-the-run humans recalls any number of ethnic genocides of the past and present.

Unfortunately, these provocative ideas rarely get off the ground, and as the story unfolds it becomes clear that the directors remain better at sustaining mood than in telling a bracing yarn. Still, the movie’s elevated ambitions demonstrate that the Spierigs are not interested in just being derivative genre filmmakers, although they do still relish in dishing out the occasionally shocking blast of gore.

In step with the filmmakers’ serious intentions, the cast gives mostly dialled-down performances, with the exception of Dafoe, whose wild-man goatee hints at his slightly loony take on his crossbow-toting rebel character. But Hawke is quietly compelling as a sympathetic vampire who secretly longs to become human again.