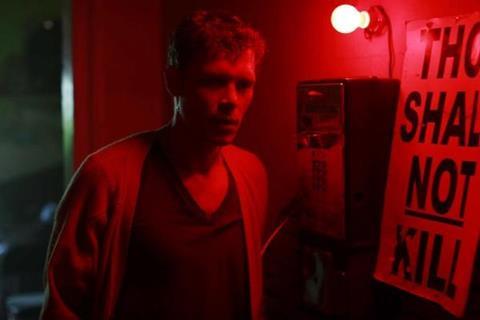 A freewheelingly moody, mysterious and often hallucinogenic film that mixes film noir with psychological drama, British director Ross Clarke’s feature debut Dermaphoria is fresh and bizarre and veers between being obscure and inaccessible through to intriguing and sultry.

Though New Orleans provides a tantalising backdrop, Ross Clarke favours stylish and evocative moodiness over familiar vistas, meaning the film is carried more by its sense of atmosphere rather than traditional sights.

Based on the novel by Craig Clevenger, the beautifully shot film it set against the backdrop of steamy New Orleans (Alan Parker’s Angel Heart is a clear reference) but it is more of a claustrophobic and edgy tale of loss and memory. The film opened the 13th East End Film Festival in London.

The film opens with Eric Ashworth (Joseph Morgan from The Vampire Diaries) waking in jail, accused or arson and interrogated by tough cop Anslinger (the always charismatic Ron Perlman, in a telling cameo). But Eric can recall nothing of the incident, and only remembers the name Desiree.

A strange new hallucinogen allows him to recover his memories, but as he meets the enigmatic Desiree (Nicole Badaan) the world around him becomes even more terrifying and his present and past start to blue together as he unearths the truths of what actually happened.

Though New Orleans provides a tantalising backdrop, Ross Clarke (whose documentary Skid Row premiered at the EEFF in 2010) favours stylish and evocative moodiness over familiar vistas, meaning the film is carried more by its sense of atmosphere rather than traditional sights. Joseph Morgan is impressive as the confused Eric, while Nicole Badaan is suitably sultry as Desiree, but the film is given a does of class thanks to astute cameos from Ron Perlman and Justified star Walton Goggins.