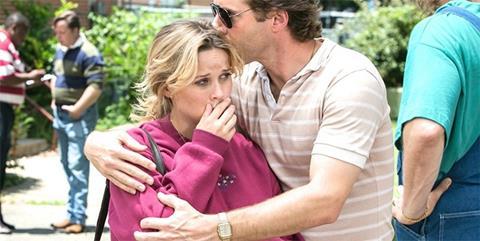 The story of the 1993 West Memphis murders and the three young men who were likely wrongfully convicted of the crime has been told and retold many times, from numerous news stories to more extensive documentary reports such as Joe Berlinger and Bruce Sinofsky’s Paradise Lost trilogy and Amy Berg’s recent film West of Memphis. It’s no surprise why the incident remains captivating: The brutal killings were lurid and sensational, while the injustice that befell the “West Memphis Three” teenagers remains an outrage.

Witherspoon delivers a credible performance as an emotionally wrecked working-class God-featuring woman and Firth is fine as the dedicated P.I.

Atom Egoyan’s Devil’s Knot is a serviceable, though inert dramatization of those horrible events. Less based-on-a-true-story and more basic translation, the movie remains so faithful to its source material that it never becomes a cinematic experience.

Thanks to actors Reese Witherspoon and Colin Firth and its salacious subject matter, Devil’s Knot could be headed to plenty of overseas play. But the staid quality of the proceedings feels more suited to small screens. In fact, with its myriad characters and the many narrative twists and turns the story has taken over the decades, it might have made a better episodic TV series than a feature film.

Devil’s Knot begins with the day of the murders, and then follows through to the initial police investigation, and the convictions that followed. The story weaves together several characters, but focuses ostensibly on three people: Pam Hobbs (Witherspoon), the grieving mother of one of the deceased boys; Ron Lax (Firth), a forthright private investigator working on behalf of the accused; and pale-faced goth Damien Echols (James Hamrick), the most infamous member of the West Memphis Three as a result of his interest in witchcraft and heavy metal music.

But Devil’s Knot is less about its protagonists than capturing the broader case itself. Witherspoon delivers a credible performance as an emotionally wrecked working-class God-featuring woman and Firth is fine as the dedicated P.I., but Scott Derrickson and Paul Harris Boardman’s screenplay barely scratches the surface of their personalities. The script attempts to humanize all of the players; in one brief scene, Hamrick’s Echols, for example, indicates his “Satanic” ways probably derive from a wounded childhood. But again, Devil’s Knot is less concerned with character than chronicle. In fact, many of the film’s best moments have little to do with the emotional stakes of the tragedy and more to do with uncovering the myriad ways the police manipulated the case.

For many reasons, the choice to hire Canadian filmmaker Atom Egoyan to tell this tale makes sense: The story of a horrible event that shakes a small-town echoes Egoyan’s greatest success The Sweet Hereafter, while lost children and traumatised parents show up in a number of his films, from Speaking Parts to Exotica. There are some effectively chilling moments in the film, as when the boys’ bodies are first discovered in a muddy forest swamp and a couple of dream sequences that effectively capture the haunting nature of the crime and its consequences.

But Devil’s Knot doesn’t have the cool-tinged sorrow of an Ego Arts production. Often filmed in the warm sun-dappled light of a Southern day—it was actually shot in Georgia—the movie may be Egoyan’s brightest film. But surprisingly, given its potent subject matter, it’s also one of his most superficial.