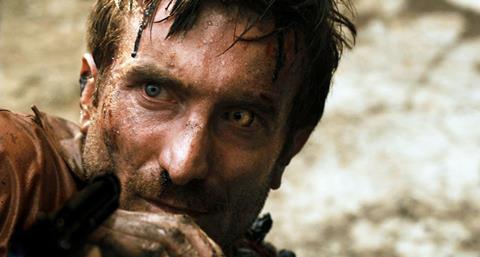 A clever set-up falls victim to slipshod follow-through in District 9, a sci-fi actioner that starts out as a genuinely disturbing treatise on bigotry before devolving into a violent blitzkrieg that, while well-crafted, lacks the inventiveness of the story’s earlier sequences.

Director and co-writer Neill Blomkamp’s occasionally probing parable of humanity’s callous treatment of a visiting alien race has obvious parallels with apartheid and inner-city poverty, but those thoughtful notions end up feeling like an excuse to get to the over-amped battle sequences which dominate the film’s second half.

The aliens, which are rendered through visual effects and prosthetics, feel amazingly real from the first few minutes

Opening domestically on August 14, District 9 may lack star power, but the film’s hip advertising campaign, effects-laden spectacle, and association with producer Peter Jackson (The Lord Of The Rings) will be three major draws. The last time a studio released such a high-concept, no-star sci-fi film was Paramount’s Cloverfield ($171m worldwide) in 2008, and Sony will need similar word-of-mouth to help drive repeat business.

The set-up is that alien refugees landed on Earth in the early 1980s, were rounded up and sent to a Johannesburg containment camp called District 9. Now, 28 years later, Wikus (Sharlto Copley), an agent for a powerful technology company which oversees the camp, is put in charge of a forced eviction of District 9’s citizens. But when he himself begins to turn into an alien after coming into contact with a toxic liquid, he must evade his bosses who want to conduct deadly experiments on him.

District 9 began as a 2005 short directed by Neill Blomkamp, which centered on the wry premise that instead of being treated as a frightening menace bent on destroying us, aliens would instead by viewed as second-class citizens once they arrived - marginalised and oppressed like other minority groups. That conceit powers the first act of District 9, as Blomkamp and cinematographer Trent Opaloch tell the story through documentary-style interviews and fake television news reports, calling to mind the similarly novel narrative techniques of The Blair Witch Project and Cloverfield.

As with the short film, District 9 creates a bitingly satiric world where humans – not aliens – are the true monsters, exhibiting hateful, xenophobic attitudes toward our docile interstellar visitors.

Unfortunately, these pointed thematic undercurrents take a backseat once the arrogant Wikus becomes exposed to the alien virus, opening the door to a standard Fugitive-style chase picture which involves Wikus befriending a sympathetic alien who helps him take on the company’s gunmen while searching for a cure.

What follows is a series of action set pieces that are energetic and increasingly gory but not particularly memorable. As an orchestrator of mayhem, Blomkamp (a commercial director making his feature debut) relies too much on gimmicky camera movement to push his sequences along.

As Wikus, the unfeeling company drone who comes to understand the aliens’ cruel plight, Sharlto Copley convinces in the film’s early stretches. His smug, clueless behaviour is pleasingly despicable, and later his change of heart generates real sympathy. Unfortunately, when District 9 requires him to become a high-octane killing machine near the end, it simply seems like too much of a stretch.

The effects work is impressive. The aliens, which are rendered through visual effects and prosthetics, feel amazingly real from the first few minutes, so much so that it’s almost possible to forget they’re fabrications. As with the aliens, the movie’s other effects are all the more startling because they seamlessly integrate into the fabric of the story, particularly the creatures’ abandoned spacecraft that silently hovers in the Johannesburg sky.