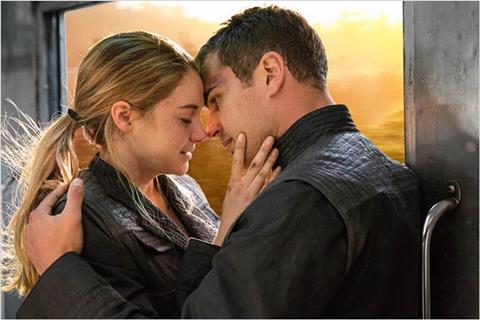 They don’t make dystopian young-adult fiction like they used to — or, rather, they make it exactly like they used to, without many new wrinkles. Divergent will no doubt be compared endlessly to The Hunger Games, and certainly this film’s backers won’t mind if they can enjoy some of that franchise’s theatrical success. But despite a strong cast and some capable effects work — to say nothing of a rousing final third — this adaptation of the smash Veronica Roth novel suffers from genre déjà vu as well as that familiar first-instalment problem of having too much setup and not enough payoff.

With a budget reportedly around $80m, relatively small in comparison to the $200-$250m summer blockbusters, Divergent gets the most out of its effects work.

Opening March 21 in the US through Lionsgate’s Summit Entertainment, Divergent could find a sizable niche for itself in a marketplace that will also include Muppets Most Wanted, Noah and Captain America: The Winter Soldier in the next few weeks. The popularity of Roth’s trilogy of Divergent books will provide a considerable boost, and rising star Shailene Woodley (acclaimed for her roles in The Descendants and The Spectacular Now) adds to audience awareness.

But the big mystery is whether this film’s parallels to The Hunger Games — both feature strong young women finding their voice in bleak future societies — will be an asset or a liability. (Though not a perfect comparison, the youth-skewing Ender’s Game from last year, which was also based on a beloved sci-fi novel, is a worst-case scenario for Divergent, managing just over $112m worldwide.)

Set in Chicago more than 100 years in the future, Divergent establishes a world that’s been decimated by war, prompting civilisation to divide people into five factions based on principal qualities, whether it’s intelligence (Erudite) or honesty (Candor). Sweet-natured teenager Beatrice (Woodley) is raised in a family that’s part of Abnegation, the selfless, but she’s now at an age where she can take a state-run test that will determine which faction she should join as an adult.

But to her surprise, her test comes back as inconclusive, a worrisome development that might mean she’s a Divergent, a shunned group of individuals that belong to no faction and are forced to survive on their own on the outskirts of society. Hiding her test results, she announces that she’s joining Dauntless, the athletic, in part because she idolised their adrenaline-fueled behaviour as a little girl. But selecting Dauntless doesn’t make her a member: First, she and her fellow Dauntless candidates must endure a gruelling boot camp where the weakest will be eliminated and left to live with the rest of the faction-less outcasts.

Published in 2011, Roth’s first Divergent book arrived about three years after the first Hunger Games novel, and the initial movies in the two series share similar narrative blueprints. In both, a headstrong, somewhat insecure young woman must leave her family behind to engage in an extreme rite of passage dictated by her severe, brutal civilization. Along the way, each woman finds a love interest but also becomes an unlikely champion of the people who must try to bring down the tyrannical government.

Sci-fi adventures about untested characters who are anointed “the one” are nothing new — they’ve been with us since Star Wars and The Matrix — but with Divergent, director Neil Burger (Limitless) settles for a visual and narrative style that offers few surprises. The movie’s attempts to impress the viewer with its dark dystopia boast plenty of grim skill — Gravity production designer Andy Nicholson drapes Chicago in endless variations of grey and disrepair — without ever really conjuring a sense of dread. Whether it’s The Hunger Games or Elysium or countless other cinematic sci-fi futures, Divergent rarely goes anywhere without evoking earlier (and, often, better) films.

This is even more unfortunate considering that Woodley has shown such promise playing believably ordinary young women struggling with feelings of inadequacy or anger. In Divergent, she’s not given much of a character to play — Beatrice is an amalgam of faintly patronising “positive” adjectives assigned to female protagonists like “strong” and “fierce” — but she does what she can to make Beatrice’s adolescent uncertainty palpable. Because Beatrice’s test didn’t come back with a concrete match for one particular faction, she runs the risk of being someone without a tribe of her own, and Woodley homes in on that anxiety, which is clearly meant to be a metaphor for teenage alienation.

It’s not that Divergent doesn’t have any provocative ideas. Though somewhat generically executed, the film bemoans society’s encouragement of conformity and even works in a commentary about the evils of genocide. But because its thematic content mostly feels second-hand, Divergent doesn’t stir the imagination: Just as its boot-camp plot is recycled from the cutthroat competitions within Ender’s Game and The Hunger Games, the film’s political messages won’t shock anyone familiar with the sci-fi genre, where a central tenet is the use of futuristic societies to make pointed observations about modern times.

Burger has surrounded Woodley with a sharp cast, including her Spectacular Now co-star Miles Teller as one of her Dauntless competitors, but everyone appears hemmed in by the recycled, humourless material. Playing a mysterious leader of this future world, Kate Winslet is understated as the movie’s principal villain, but while the role doesn’t require a scene-chewing campiness, she only rarely gets to flash the grownup intelligence and wit that are usually part of her considerable appeal.

Among the ensemble, the most pleasant surprise is Theo James, who plays Four, an initially pitiless Dauntless warrior who eventually falls for Beatrice. James at first seems impossibly wooden — hunky but hollow — but as the two characters start to develop feelings for one another, he reveals a much more engaging, vulnerable side, and there’s real chemistry between the two actors.

With a budget reportedly around $80m, relatively small in comparison to the $200-$250m summer blockbusters, Divergent gets the most out of its effects work. Though some sequences lack the eye-popping polish to which we’ve become accustomed, the CG has a professional sheen to it, especially in the imaginative look of future Chicago. Likewise, the action set pieces do a lot with a little. Divergent’s stolid first two acts give way to a far more muscular third act in which Burger guides Woodley through several terse action sequences that manage to be exciting and emotional with a minimum of visual razzle-dazzle. Only here does the film truly come to life, giving one hope that future instalments — a sequel is already in the works — will have a little more propulsion and far fewer echoes of sci-fi dystopias that came before.

Screenplay: Evan Daugherty and Vanessa Taylor, based on the book by Veronica Roth