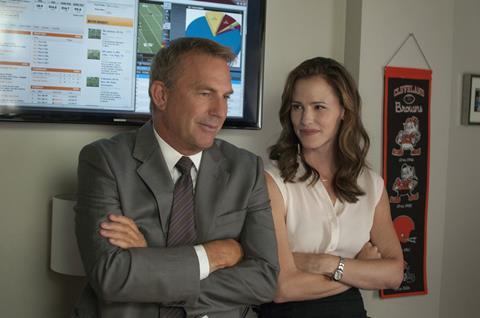 If Moneyball were about football rather than baseball and featured lovable sitcom-like characters rather than sharp-edged protagonists, it would be Draft Day, a genial, saggy comedy-drama that goes a long way on the reliable presence of Kevin Costner. Purporting to be an insider-y look at one of the biggest days on the National Football League calendar — the professional teams’ drafting of collegiate players — this film assumes you won’t mind how generally preposterous it is, sacrificing authenticity whenever a feel-good moment or easy laugh can be had. And yet, it’s hard to begrudge director Ivan Reitman and his star: Like veteran athletes, they go out there and get the job done, even if their best days are behind them.

Draft Day takes its inspiration from workplace dramas like Moneyball or the TV series The West Wing in which characters trade one-liners while doing their specialised, highly stressful jobs.

Opening April 11 in the US, less than two weeks before the actual NFL draft occurs, Draft Day will appeal to fans of Kevin Costner and football, and it’s a good bet that there’s plenty of crossover between those two camps. Catering largely to men, although Jennifer Garner’s presence as Costner’s love interest could help lure in date-night crowds, the film seems destined to be a solid, unspectacular theatrical performer that will also do sturdy business on DVD. But despite the NFL’s attempts to expand its brand into Europe, it seems doubtful that Draft Day will be a huge draw in overseas markets.

Kicking off 12 hours before the start of Draft Day, the film stars Costner as Sonny Weaver Jr., the embattled general manager of the Cleveland Browns, a team with a rich tradition that’s faced a series of humiliating losing seasons in recent times. Sonny is hoping to rebuild his franchise through the draft, but when he’s given the opportunity to trade for the top pick, the pressure is on to make the right selection. Should he follow the wishes of the Browns’ owner (Frank Langella) and go with the highly touted quarterback Bo Callahan (Josh Pence), even though the Browns already have a seasoned, albeit aging QB? Or should he listen to the abrasive but successful Coach Penn (Denis Leary) and draft a much-needed running back? And how can Sonny make a sound decision after he’s learned from Ali (Garner), his girlfriend and a team executive, that she’s pregnant?

Draft Day takes its inspiration from workplace dramas like Moneyball or the TV series The West Wing in which characters trade one-liners while doing their specialised, highly stressful jobs. Rajiv Joseph and Scott Rothman’s amusing, uneven screenplay seeks to create a layer of believability, hoping to enrapture us with the wheeling and dealing that goes on between NFL general managers and their executives while mapping out their teams’ future. At the same time, Draft Day also wants to be simplistic enough so that audiences who aren’t familiar with football can follow along with the plot machinations.

As a result, Reitman, who started his career making anarchic comedies like Stripes and Ghostbusters before moving into blander fare such as Six Days, Seven Nights and No Strings Attached, opts to cater to the uninitiated. For those who love the NFL or are curious about the inner workings of Draft Day, the movie doesn’t bring much insight or specificity, even though the NFL gave the filmmakers its blessing, providing access and making available current and former stars, broadcasters and even the league commissioner. (Actually, this access works against Draft Day: The movie is such an ad for the NFL that the sport is portrayed in the most fawning ways possible.)

Sonny’s juggling of his work and personal life is handled breezily by Costner and Reitman, who never make the stakes feel too momentous, even though the character’s relationship and job are hanging in the balance. There’s a rat-a-tat-tat predictability to the back-and-forth exchanges between Sonny and Penn or Sonny and Ali, but the efficiency with which the lines are delivered leaves them feeling like polished ready-mades: charming without calling a lot of attention to themselves.

But what really helps is Costner, the film’s MVP. The script gives Sonny a loaded backstory — his father, who died the previous week, was the Browns’ revered coach before Sonny fired him — but Costner utilises his apparently inexhaustible supply of nonchalant earnestness to sell the character’s rugged determination and concealed desperation. As he gets older, Costner seems to be more comfortable playing men who have made plenty of mistakes but are still fighting, and in Sonny he’s found a thoughtful, flawed regular guy who will somehow figure out the right thing to do. The character is a cliché, but the actor knows how to make those clichés breathe.

Costner’s supporting cast follows his lead, playing their parts with a minimum of fuss. Garner gives the tomboyish Ali just enough sass, while Leary provides the right amount of bluster to Penn. Anyone looking to Draft Day for an accurate depiction of the National Football League will be sorely disappointed, but the film executes its game plan of pushing all the right emotional buttons with weathered skill. It ekes out the win.