Dredd blasts away competition at the UK box office 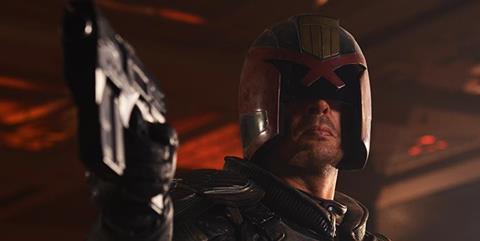 With the market down around 25% on last weekend as a result of the unseasonably warm weather, Entertainment’s Dredd took over £1m on its debut to prevent Total Recall recording a second week at the UK’s summit.

Exact figures were unavailable at the time of writing, but Dredd is the first 18-rated film to be top of the box office since Saw 3D in Oct 2010.

Enjoying the week’s strongest Fri-Sat increase for the new releases of 25%, Universal’s Anna Karenina was the second highest new entry. Joe Wright’s adaptation crafted an estimated $1.6m (£980,000) opening bow from its 494 sites, with the distributor confident it can enjoy a strong week and a long run.

Wright’s third collaboration with Keira Knightley resulted in their weakest opening, behind Pride & Prejudice’s $4.0m (£2.5m) debut and the $2.6m (£1.6m) recorded by Atonement. How much the weather played a part will become clearer on its holdover next week.

Based on non-final figures, Momentum’s Lawless is narrowly behind on $1.5m (£973,203). John Hillcoat’s western was a clear number one in Ireland over the weekend and, even with some sites still to report, is Hillcoat’s best-ever opening in the UK.

When final figures are confirmed, there’s every chance that Lawless could leapfrog Anna Karenina into second spot.

Universal’s Ted is set to become only the third film this year to break the £30m barrier, standing at $45.8m (£29.2m) after six weeks; while The Bourne Legacy has accumulated $16.7m (£10.6m) after four weeks and will require a last-minute burst of pace to topple The Bourne Supremacy’s $18.5m (£11.6m) as the second strongest Bourne performance in the UK.

This week sees saturation releases for eOne’s The Sweeney (opens Sept 12), Momentum’s Hope Springs, Universal’s ParaNorman, Sony’s Premium Rush and To Rome With Love. Revolver’s When The Lights Went Out expands from its regional release, while Axiom’s About Elly and Cinefile’s The Snows Of Kilimanjaro are among the films receiving limited releases.