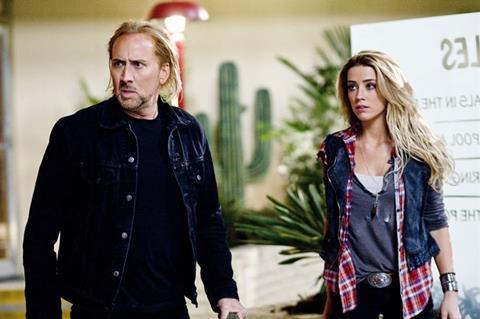 Drive Angry is perhaps the ultimate B-Movie…an all-action exploitation film brimming with blood, breasts and bullets that really does deliver in terms of raw and raucous action-adventure thrills. The mix of car chases, naked bodies, gunfights and occult madness means an adult film classification and a miss of the lucrative teen market, but if it gets the right word-of-mouth reaction it could be something of a cult hit.

Director Patrick Lussier and his screenwriting partner Todd Farmer flexed their 3-D knuckles with the successful horror film My Bloody Valentine, and with Drive Angry try their hand at the classic car chase film but with a little supernatural horror thrown in for good measure.

The film also offers up the perfect role for Nicolas Cage’s trademark intense on-the-edge weirdness (as compared with the genial wackiness he used in The Sorcerer’s Apprentice) as a vengeful ex-con who breaks out of hell – literally – to hunt down the satanic group who killed his daughter and kidnapped her baby daughter. The film manages to blend black comedy, black magic and full-tilt action, and while it does lag a little in the middle-third, the sheer pace and outrageousness keeps Drive Angry on-track.

Escaped criminal John Milton (Cage) – yes, a none-too-subtle reference to the classic John Milton epic poem Paradise Lost – deserted his daughter when she was young, but when incarcerated him hell his punishment was to watch what happened to all those he loved still on earth.

So when murderous quasi-messiah Jonah King (Billy Burke) killed his daughter with plans to sacrifice her baby daughter under the next full moon, Milton crashes out of hell with just three days to track down King and his devil-worshipping followers.

Milton smartly teams up with feisty waitress Piper (an impressive Amber Heard), who also happens to drive a super-cool turbo-charged ’69 Dodge Charger, and they set off hot-on-the-heels of King and his clan. At the same time as they have to dodge assassins and cops, also after Milton is a mysterious figure called The Accountant (William Fichtner, playing his role for dark laughs), who has been dispatched to bring Milton back to hell.

Nicolas Cage is perfectly cast as the grim-faced anti-hero, dressed in black and out to take bloody revenge. The tone of the film is set in a shoot out with some of King’s acolytes, with Milton blasting off limbs and making it clear he has no intention of taking prisoners.

The team-up with Piper is as much about the car as it is with the girl. Blessedly Piper is as good with her fists as she is driving, and when Milton saves her from her violent boyfriend the pair team up – in father-and-daughter style – as she agrees to help him on his quest.

The deal is sealed when they spend the night at a sleazy cowboy bar. She heads off with a cute waiter and Milton head of with a buxom blonde named Candy (Charlotte Ross, once of NYPD Blue). What follows is a delightfully crude’n’rude scene of a fully-clothed Milton straddled by the naked blonde fighting off a series of attackers guns blazing while still making love to Candy. Funny, crass, ridiculous and a perfect B-Movie moment.

Amber Heard – who spends much of the film in tight short jean cut-offs – is sheer perfection, and this really should be the film that sees her break-through into leading lady roles. She is funny, sassy and tough, and is the perfect on-screen partner for Cage’s monosyllabic and constricted Milton.

Perhaps even better, though, is William Fichtner’s turn as the indestructible Accountant from Hell. Wearing beautiful suits and delivering the funniest of lines, the Accountant is hot in Milton’s trail, but grudgingly come to respect his mission – plus, (as he points out) the Devil doesn’t really like satanic worshippers.