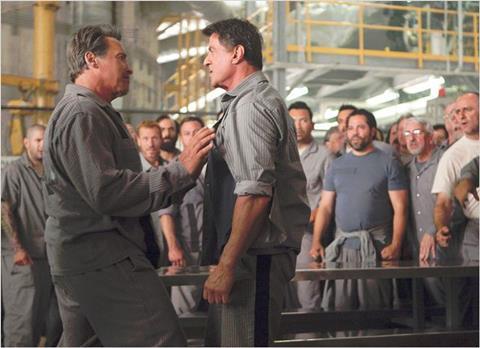 Boasting the first real team-up between action icons Sylvester Stallone and Arnold Schwarzenegger, eighties-style action thriller Escape Plan has its moments of retro fun but mostly lumbers along making limited use of its marquee names. Box office performance will depend on whether the star pairing generates excitement among mainstream moviegoers as well as aging fanboys.

Stallone and Schwarzenegger, who have previously appeared together only in ensemble action outings The Expendables and its sequel, have a subtle chemistry that occasionally perks the film up.

Already out in parts of Latin America and the Middle East, the film hits the US and UK on October 18 and much of the rest of the world later this month. The double act should certainly lead to better takes than those achieved earlier this year by Schwarzenegger’s The Last Stand and Stallone’s Bullet To The Head, especially in the international markets that have always been the actors’ strongholds.

In the flimsy plot, Stallone’s Ray Breslin is a security expert who infiltrates prisons to expose their flaws. But when he ends up in a mysterious high-tech lockup for the deadliest criminals around the plan goes awry and Ray has to join forces with prison strongman Emil Rottmeyer (Schwarzenegger) to outsmart the brutal warden (Jim Caviezel, from TV’s Person Of Interest).

Stallone and Schwarzenegger, who have previously appeared together only in ensemble action outings The Expendables and its sequel, have a subtle chemistry that occasionally perks the film up. But they’re often stuck with leaden dialogue and neither, understandably, has the agility or timing to pull off action scenes quite like he used to.

Swedish director Mikael Håfström (best known for horror offerings such as The Rite) stages the action and gunplay sequences efficiently enough but without much flair.