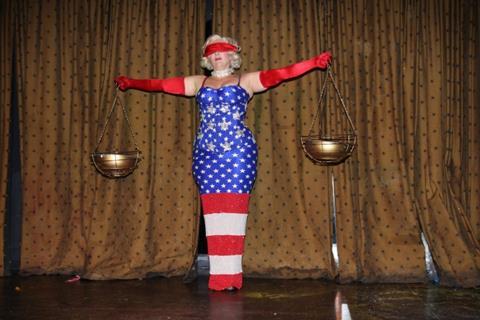 The world of alternate burlesque is examined – or should we say ‘exposed’ – and celebrated in vivid and refreshingly vulgar fashion in Beth B’s open and honest documentary that allows a series of unique and individual talents to offer intelligent and often thoughtful explanations and examinations to their burlesque world.

They are all at their happiest being ‘exposed’ on stage where they have control of how they are perceived and where they can turn the tables on the audiences.

The film certainly fits into the experimental niche cinema scene – with certain sequences possibly challenging in terms of cinema classification – but it is a fascinating and enjoyable delve into an intriguing and artistically challenging world. It is an easy fit into other film festivals, especially those favouring an indie flavour.

The performers filmed include Bunny Love, Dirty Martini, Julie Atlas Muz, World Famous *Bob*, Bambi the Mermaid, Rose Wood and Mat Fraser, and all offer thoughtful views on body politics, sexuality and how they are trying to provoke and challenge audience preconceptions.

Perhaps most intriguing is British performer Mat Fraser who uses his malformed arms - due to thalidomide - as part of his performance, claiming that he becomes more normal when highlighting his physical difference and who has formed an engagingly romantic relationship with – on stage and off – with Julie Atlas Muz.

They are all at their happiest being ‘exposed’ on stage where they have control of how they are perceived and where they can turn the tables on the audiences. Nudity and exposure empowers them and footage of them performing is entertaining, compelling and in some instances mildly shocking…but then that is the intention.