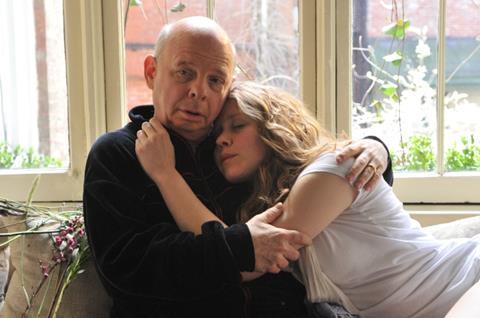 That two old acolytes who have often cooperated in the past, like Andre Gregory and Wallace Shawn, would feel like tinkering with Henrik Ibsen’s The Master Builder, a play that lends itself to many interpretations, is quite understandable. Dedicating their joint effort to the late Louis Malle, with whom they worked first in My Dinner With Andre and later in Uncle Vanya On 42 Street, is almost natural. That the outcome of this adaptation, which has been in the works for 14 years - though produced on stage only a few times for friends and intimates of the tandem, would turn out to be almost a parody of the original - should have probably been inevitable.

Sadly miscast in the main part, Wallace Shawn neither looks nor acts as someone who could have ever inspired everlasting romantic dreams but rather as a prankster who can’t take his character too seriously.

Painfully theatrical, over-acted, Jonathan Demme’s approach lacks the control that allowed Malle to find a way of moulding the irreverent originality of the two veteran mavericks into a coherent shape, without affecting it. Without someone to bridle their excesses, the production - shot mostly in close-ups by a constantly roving, hand-held camera - will hardly satisfy movie audiences watching actors unnecessarily project their text to the last balcony row when the camera is glued to their nose, or Ibsen connoisseurs who will wonder, given the play’s intense autobiographical nature, whether the playwright indeed intended to ridicule his own alter ego.

Originally intended as heavy stuff through and through, this is all about a successful architect, Solness (Wallace Shawn), dominant, egocentric, arrogant, but troubled with guilt for having secretly wished the downfall of others to advance his own career and by the fear that he has to pay with his own misery for every good turn he had in life. One of the miseries being his resigned, long-suffering, wife (Julie Hagerty) who has never outgrown the tragedy of losing first the parental home which went up in fire and then her twins who were barely three weeks old.

A young woman, Hilde (Lisa Joyce), who says she knew him 10 years earlier, appears in Solness’ home to claim the “castles in the sky” he had promised to build for her when she was only 12, and her presence is supposed to reignite his appetite for life, leading to his own destruction. The whole play is about sin and retribution, anxiety of old age, the vagaries memory plays on all of us, ambitions and fear of failing, about protestant morality, and much more. Symbols are strewn all through the story and this adaptation makes sure not one of them is missed.

Shawn, unsatisfied with the existing English versions of The Master Builder – an often-held complaint in relation to this play - claims he has taken upon himself to translate it all over again from Norwegian, though he concedes he doesn’t speak a word of it, relying on its similarity to German and the help of a friend. After cutting, rearranging and reorganising the text, the result, Shawn told New York Times, looks like “the way I would have written it, if I had been him”.  A free adaptation, to say the least.

Shawn sets it all in the form of a flashback, beginning and ending with a sneering Solness lying in intensive care after an obvious cardiac arrest. He keeps the action well within the walls of the architect’s home (no wonder the production’s budget is said to be under $1 million), but his idiosyncratic adaptation is no less debatable than any of the existing ones and Demme’s direction no less artificial than it would have looked, had it been shot during a stage performance.

Sadly miscast in the main part, Wallace Shawn neither looks nor acts as someone who could have ever inspired everlasting romantic dreams but rather as a prankster who can’t take his character too seriously. Lisa Joyce’s tomboyish sexiness and her hysterical peals of laughter would incite concern for her sanity rather than renewed passion in the older man while Julie Hagerty’s mannerisms will remind viewers that one prevalent interpretation of Ibsen’s play suggests all three leading characters may be mad. Often mentioned in the text, this could very well be the point that Shawn, Gregory and Demme were trying to make, after all.