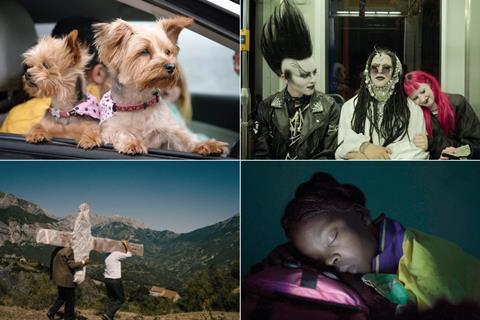 Screen’s chief critic and reviews editor Fionnuala Halligan compiles some of the standout documentary features to premiere at this year’s festivals so far, including Hot Docs, CPH:DOX, SXSW and Visions du Reel.

Dir. Frigge Fri
Our critic said: “Frigge Fri’s playful and impressionistic approach to her documentary embraces the theatre that these three outsiders create to insulate themselves from an unsympathetic world.”
Read our review

Dir. Avi Mograbi
Our critic said: “This sobering, essential documentary focuses on the testimony of Israeli men who served in Gaza and the West Bank.”
Read our review

Dir. Annabel Verbeke
Our critic said: “The hefty consequences of Brexit are viewed with the lightest of touches in Annabel Verbeke’s kaleidoscopic documentary, which vibrantly captures the human ebb and flow on a ferry crossing between Northern Ireland and the Republic Of Ireland.”
Read our review

Dir. Matthew Walker
Our critic said: “Walker’s film is stranger and more nuanced than its ‘late-life A Star Is Born’ set-up would suggest. What makes it stand out from a host of imitators is its shape-shifting moral and emotional arc: the story we get at the end is richer, messier and more interesting than a mere fairytale.”
Read our review

Dir. Ousmane Samassekou
Our critic said: “A humane, deeply moving film, this should resonate with audiences and festival programmers following a world premiere at CPH-DOX and a North American premiere at Hot Docs.”
Read our review

Dir. Ahmet Necdet Cupur
Our critic said: “The intimacy of the interactions and the obvious emotional connection that the filmmaker has with his subjects provides this documentary with a remarkably unfiltered candour, highlighting a culture clash that extends to an entire regressive community.”
Read our review

Our Memory Belongs To Us (CPH:DOX)

Dirs. Rami Farah, Signe Byrge Sorensen
Our critic said: “Recorded in Daraa, Syria from 2011-12, the film invites a dialogue between the material and three of the men who shot it. The result is a personal, powerful and thought-provoking interrogation, not just of the grassroots movement against the Assad regime, but also of the role played by citizen journalists in raising awareness of it.”
Read our review

Dirs. Harri Shanahan, Sîan Williams
Our critic said: “This boisterous oral history of a little-known underground London lesbian scene which spawned from a collision between punk and feminism is a blast.”
Read our review

The Return: Life After Isis (SXSW)

Dirs. Udi Nir, Sagi Bornstein
Our critic said: “Focussing on seven main characters, all in their early 20s, Viral not only provides an idiosyncratic global perspective on a tumultuous year, it is also an insightful snapshot of Gen Z and its relationship with social media.”
Read our review

Who We Are: A Chronicle Of Racism In America (SXSW)

Dirs. Emily Kunstler, Sarah Kunstler
Our critic said: “Two hours, painful though they may be, simply aren’t enough as this ACLU leader sews America’s troubled racial present into the fabric of its bloody past via a staged monologue.”
Read our review