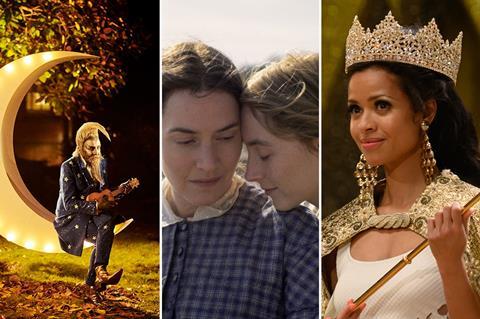 Dir: Aleem Khan
Joanna Scanlan plays a woman who, having converted to Islam for her late husband, uncovers details of his secret family in the French town of Calais. After Love is produced by Matthieu de Braconier of London and Paris-based outfit The Bureau and is backed by BBC Films and the BFI. Khan is a former Screen UK Star of Tomorrow.
Contact: The Bureau Sales

Dir: Clio Barnard
The new film from the Bradford-based filmmaker is now in post. Little is known about it beyond that it is again set in the northern English town and is supported by BBC Films and the BFI. Barnard’s first film the docu-drama The Arbor, debuted at Tribeca in 2010, while 2013’s The Selfish Giant premiered in Directors’ Fortnight at Cannes, and Dark River was at Toronto two years ago.
Contact: Altitude Film Sales

Dir: Francis Lee
Lee’s anticipated second film following the low-budget critical hit God’s Own Country is a romantic drama starring Kate Winslet as a Victorian-era palaeontologist who forms an intense bond with the wife of a wealthy man entrusted to her care, played by Saoirse Ronan. Produced by See Saw Films, with backing from the BFI and BBC Films, Ammonite is a hot commercial prospect, selling strongly around the world, with major festivals in its sights.
Contact: Cross City Films

Dir: Prano Bailey-Bond
Niamh Algar, a former Screen Star of Tomorrow, stars with Michael Smiley in this anticipated genre film directed by another former UK Star Of Tomorrow. Set in 1984 in London (and filmed in Leeds), it is about a censor who starts to lose her grasp on reality after watching a ‘video nasty’. Backed by the BFI, Film4, Creative England via the BFI NETWORK and Ffilm Cymru Wales. Produced by Helen Jones of Silver Salt Films.
Contact: Protagonist Pictures

Dirs: Peter Middleton, James Spinney
The second feature documentary from the Notes On Blindness directors promises to weave together archive sources, including from Charlie Chaplin’s personal collection, to paint a portrait of the man who was once the most famous person in the world. Backed by Film4 and the BFI, it’s now in post.
Contact: Altitude Film Sales

Dir: Edgar Wright
This 1960s-set psychological horror could find a midnight festival slot before Focus Features and Universal start the international roll out in September. Anya Taylor-Joy, Thomasin Harcourt McKenzie and Matt Smith star in the film about which little is known in the way of plot. Working Title Films produces, with support from Film4.
Contact: Focus/Universal

Dir: Ben Sharrock
The offbeat story of refugees waiting to be granted asylum on a fictional Scottish island is now in post after a five-week shoot in the autumn of 2019 on The Uists in the Outer Hebrides. Amir El-Masry stars with Vikash Bhai, Ola Orebiyi and Kwabena Ansah, along with Sidse Babett Knudsen and Kais Nashif and various non-professional actors. Sharrock won the prestigious Michael Powell award at the Edinburgh International FIlm Festival for his debut feature Pikadero in 2016. Film4, Screen Scotland and the BFI are backing the project.
Contact: Protagonist

Dir: Philippa Lowthorpe
Keira Knightley, Gugu Mbatha Raw and Jessie Buckley star in this story of the 1970 Miss World contest which was disrupted by the newly founded Women’s Liberation Movement. The project is co-written by Rebecca Frayn and Gaby Chiappe and the backers are Pathé, BBC Films, Ingenious Media and the BFI.
Contact: Pathe

Dir: Corinna Faith
Another hot genre debut from a UK female filmmaker (see Censor), The Power stars Rose Williams as a young nurse on her first night shift in a crumbling hospital in a 1970s London hit with rolling black outs. Faith’s screenplay for The Power featured on 2018 Brit List. Backed by the BFI and Creative England
Contact: Altitude Film Sales

The Roads Not Taken (aka Molly)

Dir: Sally Potter
Javier Bardem and Elle Fanning star as a father and daughter dealing with the father’s troubled mental state over one hallucinatory day in New York City.  Laura Linney and Salma Hayek co-star, Focus has key international territories and Bleecker Street will release in the US. Hanway has international rights. Potter’s last film The Party premiered at Berlin in 2017. Backed by BBC Films and the BFI.
Contact: Hanway Films

Dir: Mitch Jenkins
Based on an original story by graphic novelist Alan Moore, The Show is about a man with multiple identities who arrives in town – Northampton - to find a world of lotharios, sleeping beauties, gangsters and adventures. It is Moore’s first original feature film screenplay to reach production. Tom Burke stars with Siobhan Hewlett. Produced by Emu Films and backed by the BFI and Lipsync.
Contact: Protagonist

Dir: Joanna Hogg
This sequel will pick up exactly where the first left off, with Honor Swinton Byrne, her mother Tilda, Ariane Labed and Richard Ayoade reprising their roles. A24 already has US rights, and Curzon has the UK. The Souvenir played Sundance and then Berlin but the earliest this could premiere is likely to be Cannes. Hogg is now in the edit suite.
Contact: Protagonist

Dir: Gabriel Range
Beast star Johnny Flynn plays a young David Bowie and Jena Malone is his wife Angie in this chronicle of Bowie’s first visit to the US in 1971. Range is the Emmy award-winning filmmaker whose feature credits include I Am Slave and Death Of A President. The screenplay is by Christopher Bell.
Contact: Film Constellation

Dir: Cathy Brady
The feature debut of Irish director Brady is about two sisters who unearth secrets about their mother. It is set in Northern Ireland and Ireland and backed by the BFI, Screen Ireland, Northern Ireland Screen, Film4 and the Wellcome Trust among others. Nika McGuigan and Nora-Jane Noone star. Tragically, McGuigan died in July 2019.
Contact: Great Point Media