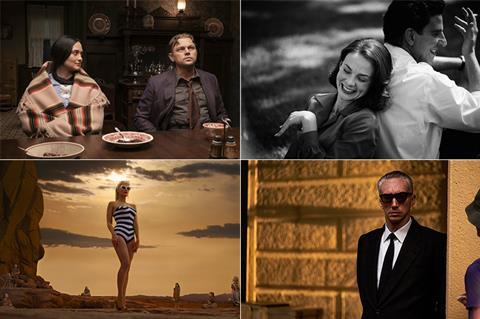 AND
Dir: Yorgos Lanthimos
The subject matter is under wraps for what is the second film Lanthimos shot in 2022 (while Poor Things was in post) with producers Element Films and backers Film4 and Searchlight. Emma Stone stars with Jesse Plemons, Willem Dafoe, Margaret Qualley, Hong Chau, Joe Alwyn, and Mamoudou Athie. Co-written by Lanthimos with regular collaborator Efthimis Filippou, AND is now in post.
Worldwide distributor: Searchlight

Asteroid City
Dir. Wes Anderson
Anderson’s latest all-star ensemble is widely expected to debut in Cannes given the June 16 US release date and his 2021 trip to the Croisette with The French Dispatch. Based on a story by Anderson and Roman Coppola, the film takes place during a Junior Stargazer convention in a fictional American desert town circa 1955. Anderson regulars Jason Schwartzman, Scarlett Johansson, Tilda Swinton, Adrien Brody and Ed Norton are on board for the ride alongside newbies Tom Hanks and Margot Robbie.
Worldwide distributor: Focus Features

Barbie
Dir. Greta Gerwig
Set for a July 21 release in North America, Gerwig’s adaptation of the iconic Mattel brand could deliver a statement on the Croisette, in or out of competition. The director of Lady Bird and Little Women would appear well placed to adapt a modern take on a best-selling toy whose creator Ruth Handler was fond of saying women had choices – and co-wrote the screenplay with her partner Noah Baumbach. Margot Robbie produces and stars alongside Ryan Gosling as her best male friend Ken.
Worldwide distributor: Warner Bros

Beau Is Afraid
Dir. Ari Aster
It has taken only two films – Hereditary and Midsommar – to confirm Aster as a horror master in the making and one of the most unnerving directors working today. Known for collaborating with big talents, Aster’s third feature, previously titled Disappointment Blvd., is set to open in the US on April 21. That makes it a potential world premiere selection at SXSW in March, which just announced its first wave and will unveil further titles in early February. Joaquin Phoenix stars in the story spanning multiple decades about a man who embarks on an odyssey to get home to his mother, echoing events in Aster’s 2011 short film Beau. The cast includes Nathan Lane, Amy Ryan, and Parker Posey.
Worldwide distributor: A24

Challengers
Dir. Luca Guadagnino
Guadagnino hasn’t been idle of late. The director of Bones And All is in post on Challengers, a romantic comedy set in the world of professional tennis and starring Zendaya, Josh O’Connor and Mike Faist, a breakout from West Side Story. The story follows three people who cross paths again on the grand slam circuit. An August 11 release date in the US through United Artists Releasing would rule out a slot in Venice, where Guadagnino likes to debut his films. But release plans, like tennis matches, can always spring surprises.
Worldwide distributor: MGM

Dune: Part Two
Dir. Denis Villeneuve
Villeneuve’s concluding instalment in the spectacular adaptation of Frank Herbert’s cult sci-fi will wrap up a cinematic event that is expected to earn Oscar nominations across the board if it matches the grandeur of its 2021 predecessor, let alone betters it. The first film premiered in Venice and while Part Two is scheduled to open in the US on November 3, if ready in time a Lido bow would tie a neat bow around the whole thing. Timothée Chalamet, Zendaya, Javier Bardem and Stellan Skarsgard are among the cast.
Worldwide distributor: Warner Bros

Elemental
Dir. Peter Sohn
Pixar releases make for great Cannes catnip and the latest one from the animation hit factory could fit the bill. The story of natural elements living together is getting an exclusive global theatrical release (it is only the second Pixar film after last year’s Lightyear to do so since Onward in March 2020) and opens in the US on June 16, dropping it in the Cannes corridor for a possible out of competition world premiere on the Croisette. Inside Out was the last Pixar film to play the French Riviera and now that Bob Chapek has been ousted at Disney, the image of a beaming Bob Iger making things right again on the red carpet makes a lot of sense.
Worldwide distributor: Disney

The Holdovers
Dir. Alexander Payne
Focus features forked out a reported $30m at TIFF for worldwide rights to The Holdovers, and what a prospect it is. Payne’s first film since Downsizing premiered at Venice in 2017 is the writer-director’s first on-screen reunion with Paul Giamatti since Sideways warmed hearts nearly 20 years ago. Giamatti plays a curmudgeonly teacher at a New England prep school in 1970 who gets snowed in over the holidays with a problem student and the Black head cook whose son has died in the Vietnam War.
Worldwide rights: Focus Features

Indiana Jones And The Dial Of Destiny
Dir. James Mangold
Harrison Ford could be on the Criosette for his final outing as the beloved adventurer. Mangold has assumed the reins from Steven Spielberg – who directed the first four entries in the beloved franchise dating back to 1983 with Raiders Of The Lost Ark – and has promised a romp, not a sad finale, for Ford. The action is set in 1969 smack bank in the middle of the Cold War and the Space Race. Antonio Banderas, Mads Mikkelsen, and Phoebe Waller-Bridge are among the cast. Disney has set a June 30 US release for the Lucasfilm and Amblin Entertainment tentpole.
Worldwide distributor: Disney

The Iron Claw
Dir. Sean Durkin
Durkin’s latest feature after Sundance 2020 entry The Nest follows the true-life, tragic Von Erich family of wrestlers who made an impact on the sport from the 1960s onwards. Harris Dickinson, Zac Efron and Jeremy Allen White star alongside Lily James. The Canadian filmmaker’s drama Martha Marcy May Marlene screened in Cannes in 2011.
Worldwide distribution: A24

Killers Of The Flower Moon
Dir. Martin Scorsese
Scorsese has reunited with a streamer after his 2019 Netflix epic The Irishman. This time, fast-rising awards season heavyweight Apple is the backer (after taking over the film from Paramount) in what promises to be a luscious adaptation of David Grann’s book about murders of the Native American Osage tribe in the US in the 1920’s and the ensuing FBI investigation. Scorsese regulars Leonardo DiCaprio and Robert De Niro are the headline names and the cast includes Jesse Plemons.
Worldwide rights: Apple TV+

The Killer
Dir. David Fincher
Fincher has reunited with Netflix following 2020 awards contender Mank in this thriller starring Michael Fassbender as an assassin who sprouts a conscience. Tilda Swinton also stars. The Killer is based on the French graphic novel of the same name. Unless Netflix is happy with an out of competition slot, this likely won’t be at Cannes. Expect this to emerge at a major festival in the second half of the year. Whether Netflix promotes it with a “preview” theatrical release remains to be seen.
Worldwide rights: Netflix

Maestro
Dir. Bradley Cooper
Cooper’s directorial follow-up to his admired A Star Is Born focuses on the relationship between Leonard Bernstein, the composer of West Side Story and other musicals, and his wife Felicia Montealegre played by Carey Mulligan. Cooper plays Bernstein. Martin Scorsese and Steven Spielberg are on board as producers. A Star Is Born premiered on the Lido in 2018 and a return to Venice could be a very likely outcome.
Worldwide distributor: Netflix

The Marvels
Dir. Nia DaCosta
The filmmaker behind the acclaimed 2021 Candyman reboot returns with the Captain Marvel sequel starring Oscar winner Brie Larson. A July 28 US release date makes this a possibility for an out of competition berth in Cannes. Among the cast are Teyonah Parris, Iman Vellani, and Samuel L. Jackson.
Worldwide distributor: Disney

May December
Dir. Todd Haynes
Haynes and regular producers Christine Vachon and Pamela Koffler have corralled Natalie Portman, Julianne Moore and Charles Melton for a drama about a Hollywood star whose notorious marriage is tested when an actress who will portray her arrives to research the role. Haynes’ last film The Velvet Underground stormed Cannes in 2021 and a major festival berth seems assured.
Sales: Rocket Science, international; UTA Independent Film Group and CAA Media Finance, US.

Mission: Impossible – Dead Reckoning – Part 1
Dir. Christopher McQuarrie
Tom Cruise could be back on the Croistte this year as the latest entry in the spy franchise that launched in 1996 finally gets ready to jump onto cinema screens in 2023. The date is July 14 in the US, placing this firmly in the Cannes corridor for an out of competition slot. Rebecca Ferguson, Simon Pegg and Ving Rhames are among the returning cast members joined by Vanessa Kirby, Henry Czerny, and Hayley Atwell. Cruise announced the title of this film during CinemaCon last year, while dangling from a biplane above the Grand Canyon.
Worldwide distributor: Paramount

Napoleon
Dir. Ridley Scott
Ridley Scott reunites with his Gladiator star Joaquin Phoenix in the drama about French leader Napoleon and the tempestuous relationship with his wife Empress Josephine, played by Vanessa Kirby. Said to be heavy on battle sequences and likely to boast bravura performances, this will be an anticipated arrival possibly in the second half of the year.
Worldwide rights: Apple TV+

Nightbitch
Dir. Marielle Heller
After A Beautiful Day In The Neighborhood and Can You Ever Forgive Me? Heller is back with Nightbitch, a fantasy comedy horror about a homebound suburban mother who suspects she might be turning into a dog. Amy Adams, Kerry O’Malley and Scoot McNairy star in the project, which is in post.
Worldwide distribution: Searchlight Pictures

Oppenheimer
Dir. Christopher Nolan
The July 21 US release date for Nolan’s first feature since Tenet could make this work as a splashy Cannes platform launch. Cillian Murphy stars as scientist J. Robert Oppenheimer, the so-called father of the atomic bomb whose breakthrough changed everything. Shot in Imax, Oppenheimer will get a long exclusive theatrical release through Universal, who will want to look after the famously pro-theatrical filmmaker after he jumped ship from Warner Bros in protest over WarnerMedia’s 2021 theatrical-HBO Max day-and-date release strategy for that studio’s entire slate. Emily Blunt and Matt Damon also star.
Worldwide distributor: Universal

Poor Things
Dir. Yorgos Lanthimos
Poor Things is a Victorian-era tale about a young woman brought back to life by a scientist in which Emma Stone, Margaret Qualley and Willem Dafoe star in their second Yorgos Lanthimos film of the year following AND - although Poor Things shot first. Element Films, Film4 and Searchlight are all on board. Ramy Youssef, Christopher Abbott, Jerrod Carmichael also star in the film wrritten by Tony McNamara. Lanthimos’ The Favourite premiered at Venice although it’s fair to say every major festival will be clamouring for a new Lanthimos film.
Worldwide distributor: Searchlight Pictures

Priscilla
Dir. Sofia Coppola
Sofia Coppola has reportedly wrapped production on her story about the private life of Priscilla and Elvis Presley, offering a different take on the life of The King just as  Baz Luhrmann’s Elvis gyrates through awards season. Coppola, an Oscar-winning screenwriter for Lost In Translation, adapted the screenplay from Priscilla Beaulieu Presley’s memoir Elvis And Me and makes her return after 2020’s On The Rocks. Priscilla stars Cailee Spaeny in the title role and Jacob Elordi as Elvis. Coppola won the best director award at Cannes 2017 for The Beguiled and a return to the Croisette would not be out of the question were the film ready in time. A24 distributes in the US.
Worldwide distributor: Stage 6 Films

Untitled Ethan Coen Comedy
Dir. Ethan Coen
Two years after Joel Coen made his solo directorial debut on The Tragedy Of Macbeth, brother Ethan is making the same move. The project is styled as a Russ Meyer-inspired action sex comedy about a road trip. Beanie Feldstein stars with Margaret Qualley and Geraldine Viswanathan. Working Title Films produces. Films by Coen and his brother have graced festivals all over the world so if the new comedy is ready in time, expect a prestige berth.
Distributor: Focus Features