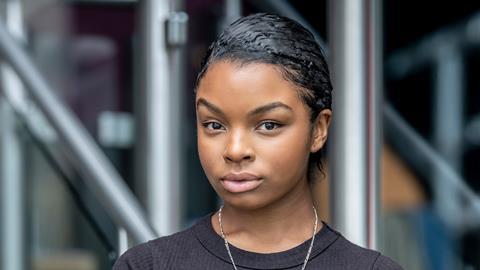 The pandemic-induced shutdown in spring did not stop Yasmin Monet Prince from practising her craft.

In late July she filmed an episode of ITV drama series Unsaid Stories, opposite Nicholas Pinnock (The Last Tree). After just a couple of days shooting — under Covid-19 guidelines — the episode wrapped and aired within two weeks.

The short dramas explore various forms of racism, with Monet Prince’s episode ‘Generational’ depicting a father and daughter working through their differences after he catches her sneaking out to a Black Lives Matter march. “It’s so relevant right now — I hope it resonates with people,” says the Londoner. “I like to express my thoughts and opinions through my work. It’s easier to portray what I think than to speak about it.”

The self-contained scale of the project marked a change from the actress’s recurring role in Amazon Studios’ action series Hanna. Monet Prince appeared in three episodes of the first season, upgrading to a regular for the full eight of the second run.

She plays Clara Mahan, a trainee at the shady Utrax facility who flees with the super-strength protagonist played by Esme Creed-Miles. “I had no idea how big it was, I was just playing it in the moment,” recalls Monet Prince of her four auditions. The role required months of intense physical training. “My stamina and strength went up — it was so cool for my body to do things it was unable to do before,” she says with a laugh.

Monet Prince’s first screen role came in 2012 Star of Tomorrow Mahalia Belo’s TV film Ellen (2016), when the actor was midway through a four-year acting course at London’s Brit School. “There wasn’t a lot of pressure on me,” she says. “Mahalia was so clear, and really helped me get contacts and find an agent.”

Her sights are set on a diverse career. “Theatre can be really intense because you have one chance — and then one chance again and again,” she says. “When you’re doing film and TV you feel a bit more creative, like you can make mistakes.”

Naomie Harris is an idol she would love to emulate. “She has such a wide range, she can play anything,” says Monet Prince. “That’s what I want to be able to achieve as an artist. And hopefully one day create my own work and bring in other people.”