The director talks to Jeremy Kay about her Sundance World Documentary selection about an Iranian girl who dreams of becoming an astronomer despite strong family pressure. 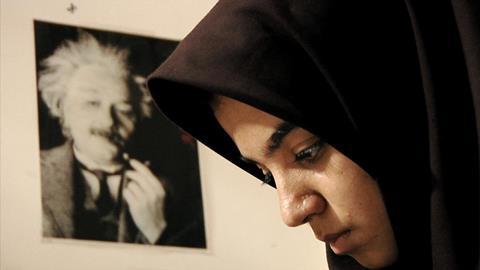 SEPIDEH – Reaching For The Stars director Berit Madsen studied film at the Ateliers Varan in Paris, gained an MA in ethnography and social anthropology from Aarhus University in Denmark and took supplemental courses at the Danish School Of Media And Journalism.

Is this your first film?
I’ve been making films in Nepal, Niger, the Golf and Denmark. SEPIDEH – Reaching For The Stars is my first feature documentary.

Why do you make films?
Documentary film-making for me is a unique and extremely exiting tool for discovery – for accessing unknown realities and, not least, for provoking my own conceptions. It fascinates me that life is so complex and I’m driven towards a subject if I feel that I can’t get a clue out of it. I love to work with an observational approach instead of basing my films on interviews because this is the way I can be disturbed the most, by letting reality take me to into unforeseen directions.

I like to believe that by combining an open-ended methodology with an artistic cinematographic style we can make documentaries that can entertain and reach our emotions while at the same time widen our perspectives on our social surroundings. Documentary films are our best means of communication, especially across the boundaries that are created by preconceptions.

How did you find the story about Sepideh and why is the story important to tell?
It was this same kind of disturbance that initiated me to start filming SEPIDEH – Reaching For The Stars. My husband is from Iran and even though I’m familiar with Iran, I was very surprised to learn about this small town of Saadat Shahr in the conservative south where a local physics teacher for ages has tried to raise means to build an observatory and boys and girls would go out alone at night to look at the stars – something that’s pretty far removed from what we normally associate with Iran.

What’s it about?
SEPIDEH is a film about Sepideh, a young Iranian woman who with the help of her amateur telescope, her stubbornness and courage cleverly works towards making her dream of becoming an astronomer come true. I was totally carried away when meeting Sepideh the first time and learned of the promise that she had made to her dead father to become a big space explorer to make him proud of his daughter and how she had teamed up with Albert Einstein and his non-conformist mindset to fight back the resistance to her unruly behavior that she was encountering from her surroundings.

I knew that I had to pursue this story of Sepideh that was taking me into another side of Iran – the story that isn’t about the oppression of women and victimisation, but about change coming to Iran. As Sepideh herself remarks in the film after her uncle has threatened to kill her if she crosses the red line of moral behavior, “After me there will be 10 more doing what I have done. I’m not alone.” Throughout the four years of filming her, from the research footage in 2009 till the last scene shot in January 2013, Sepideh turns the film into a story about hope, about the power of dreams and how we can change our destiny.

What do you have lined up next?
I’m now working on a new documentary film that is situated in Beirut, Lebanon, with the working title Beirut, Baby. It struck me that we hear a lot about male dominance, female oppression and [male-dominated society] in the Middle East but less about what Arab men themselves wish for in their life. Just as SEPIDEH exposes the flip side of that story of female oppression, here encountered through a young Iranian woman’s perspective, in Beirut, Baby I’m pursuing a group of men and their puzzled dreams as they look for love in a crazy Middle Eastern capital where you never know what tomorrow will bring. It’s set to be a warm and humorous film.