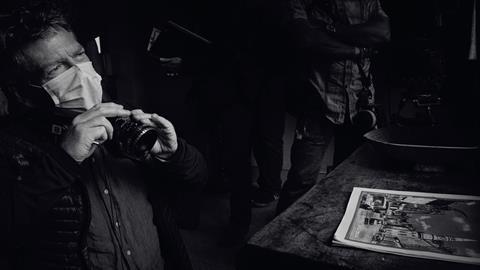 Filming his semi-autobiographical feature Belfast prompted an increase in cardiovascular activity for Kenneth Branagh. “Our one-way systems caused various hilarity — the steps everybody took, as measured by their devices, went up significantly,” says the filmmaker, discussing the changes needed to allow filmmaking to continue in the time of Covid-19. “You were often travelling a great deal further.”

Telling the story of a boy growing up in the tumult of late 1960s Northern Ireland, Belfast is a film Branagh had wanted to make for “the last 10 or 15 years”. He suddenly had the time and headspace to write his passion project having completed the majority of post-production on his second Agatha Christie adaptation, Death On The Nile for 20th Century Studios, by the time the UK lockdown began in March.

“It had the impetus and energy to move to production with speed that some projects are just born with,” says Branagh.

No production, however, is easy to shoot right now. Covid-19 testing for “anyone joining the production in any capacity” began two weeks ahead of the August 27 start date, and continued for the on-set crew every day throughout the shoot. The “much-reduced” crew was separated into zones: green for the shooting crew, red for people with no requirement to be on set, and a middle zone for those interacting with the set.

In a short time, Branagh was able to sign up a cast for Belfast that included Jamie Dornan, Ciaran Hinds, Caitriona Balfe and his frequent collaborator Judi Dench, who has long been attached to the project. Branagh emphasises the care they took to keep safe the 85-year-old actress he refers to as “a complete, sleeves-rolled-up collaborator”.

“Judi was in hair and make-up away from other people and went from there to the set with a mask,” he says. For scenes in confined spaces, the camera crew filmed through windows to keep the number of people in an enclosed space to “five or six” maximum.

Daily temperature checks and a digital questionnaire monitored the health of all involved. The film includes several young actors; production had to provide satisfactory evidence of appropriate care and concern in order to obtain child licences from local councils.

Branagh was even able to incorporate the safety measures into his story. “In recreating the historical threat that period produced in street life, we had crowd artists masked on screen,” he says.

The film shot for several days in the eponymous Northern Irish capital, before moving to locations in and around London in September. “We would have been in Belfast for longer [had it not been for the pandemic],” the director admits. Despite this compromise, Branagh sings the praises of his home city’s creative set-up.

“When we were there, we were incredibly fleet of foot,” he says. “The film infrastructure in the north of Ireland is so highly developed, partly as a result of the success of Game Of Thrones, that the assistance we were given was second-to-none.”

The film’s producers are Laura Berwick, Célia Duval, Becca Kovacik and Tamar Thomas; the latter has worked as Branagh’s assistant on titles dating back to 1992’s Peter’s Friends, and received a first producer credit on his William Shakespeare feature All Is True in 2018. Branagh found working with close companions made handling the trials of the new guidelines easier.

“Everybody understood, however complex or time-consuming some of the preparations were, that it not only protected particular individuals who might be in vulnerable groups — it protected absolutely everybody,” he says. “There was a tremendous sense of shared responsibility.”

As a project packaged after the pandemic began, Covid-19 cover was not included in the independently financed film’s production insurance. “We had normal insurance arrangements, but the larger Covid-19 element of it was not something we could do in a practical way,” says Branagh.

Time was also a factor. “It seemed like there was a narrowing window,” he adds. “Based on the brevity of time and not wanting to burden ourselves with financial protections that took a while to gather, we stayed a little more flexible and independent.”

Across the UK, productions that were interrupted by lockdown have likewise had to deal with the ‘new normal’. The pandemic pressed the pause button on Reggie Yates’ feature directing debut Pirates with 10 days left of principal photography.

“It was one of the darkest days of our producing careers,” says Kate Norrish, producer of the BBC Film and BFI-backed comedy alongside Polly Leys at Hillbilly Films. “It felt like an enormous responsibility to make that call — for people’s jobs, lives and health.”

Shooting resumed on September 7 — the day the completed film was originally due for delivery. However, the break brought renewed vigour and increased control. “We knew what it felt like to be shooting right in the middle of the storm, with fewer people on set, people very worried, no-one knowing what was going on,” says Norrish. “It didn’t feel safe at all by the time we shut down.”

Safety procedures for the restart meant that “once we were back, every day felt like a massive achievement”. Those measures included a daily health questionnaire, to be taken prior to arriving for work. If passed, a green passport was given to take to the medics’ tent where different-coloured wristbands, depending on your cohort, allowed you to enter the set. 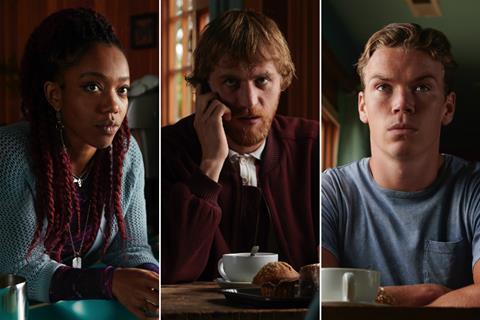 Ben Pullen of Sentinel Entertainment and Matthew James Wilkinson of Stigma Films, producers on Malachi Smyth’s heist musical The Score, found their partnership essential to getting the production ready.

“We often talk about, ‘How would one producer manage to steer a film forward?’” says Pullen. He became the production’s “Mr Covid”, taking care of that strategy and allowing Wilkinson to focus on running the film.

Production halted on The Score the day before filming was due to begin on March 16; it restarted on August 31 and finally wrapped on October 2.

It was co-produced and backed by France’s PontNeuf Productions, with further backing from post equity firm Trigger Films and gap financing from Quickfire Films, both of the UK; plus support from the BFI’s Covid-19 Production Continuation Fund.

Similar to Belfast, colour-coded concentric circles on set kept groups apart as much as possible, with the central group comprised of only nine people. “If I saw a red person within two metres of a cast member, I could breathe easily,” says Pullen. “They were either a make-up artist, or the boom op or the director.”

The necessary distancing may bring changes to how producers work in the future. “Ben and I found ourselves non-essential to that bubble,” says Wilkinson. “We could watch what was happening and feed back through monitors.”

Despite evident hardships, the coronavirus has allowed for occasional happy accidents. In prepping for a Friday night shoot in Southwark, London, Norrish was anxious about interference from inebriated onlookers. Then the day before, a 10pm curfew was introduced for all premises in England — and the night-time streets were empty. “For once, Covid-19 worked for us,” laughs the producer.

For The Score, having to reduce the number of extras in a diner scene — a central location for the film — meant those remaining could be more involved. “They became actors, and informed the narrative of the film here and there,” says Wilkinson.

Crowd control has driven up costs on Craig Roberts’ The Fantastic Flitcrofts, which began shooting in mid-October, financed by BBC Film, the BFI and Ingenious Media. “The issue is what to do with [extras] when you’re not shooting,” says producer Nichola Martin of Baby Cow Productions, producing with Tom Miller from Water & Power Productions, and Kate Glover. “The bus that transports them can be half full; the room has to be twice the size because they all need to be kept apart.” 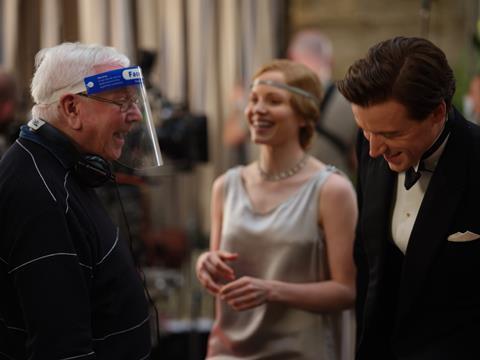 Producer Mike Elliott of Emu Films has shot two features since the summer. Terence Davies’ Benediction, about the life of English poet, writer and soldier Siegfried Sassoon, was three days from production when lockdown hit in March. It ended up shooting for seven weeks from September 14, produced with MYRA Entertainment and backed by the BFI, Lipsync, Creative England’s West Midlands Production Fund and BBC Film.

The latter funder was confident in Elliott’s ability to carry off a Covid-19-safe shoot, as he had already completed pick-ups on Steve McQueen’s ‘Small Axe’ series during the pandemic, ahead of several episodes premiering at festivals including New York and London this autumn.

As well as weekly Covid-19 testing, an antibody test before shooting revealed that 35% of Benediction crew members had already contracted the virus and were now negative for Covid-19 — with 74-year-old Davies among them.

“It gave us a degree of comfort — he was in a very healthy condition for going into the shoot,” says Elliott. 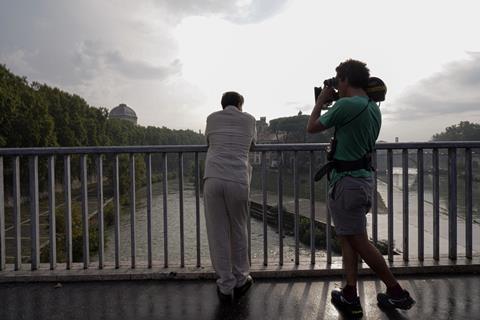 On a smaller scale was Giovanni Maderna’s A Walk, shot by cinema­tographer Robbie Ryan in a single day in Rome in September. The feature was put together by Emu and EL Entertainment from start to finish in two weeks without finance or sales.

It follows a walk through the streets of mid-pandemic Rome where an opinionated writer (Lino Musella) engages with a diverse array of characters: sometimes wearing a mask, sometimes not, avoiding handshakes but then embracing when emotion prevails.

“It’s experimental, but deliberately shot in a style to embrace the pandemic,” says Elliott.

Similarly, Benediction benefited from using just 12 key locations — and also because several of those sites were on sizeable stately homes. “We could bed in and control them completely,” says Elliott. “We had a pretty strident supervisor on set at all times.”

He is one of several producers to quote a budget increase of 15%-20% due to Covid-19 costs, with tests the major expenditure. “We wanted a very quick turn­around [on tests], so we got a facility to come on location,” he says. “That was the chunkiest cost.”

Scale plays a big factor in the Covid-19 costs according to Nicky Earnshaw, head of production at See Saw Films, which has also been juggling multiple shoots. See Saw led pick-ups on John Madden’s war feature Operation Mincemeat alongside the final days on Andrew Haigh’s The North Water, a four-part limited series for BBC Two.

“If you’re testing 50 people regularly, it really adds up,” she says. “Then there’s the Covid-19 supervision team. Depending on the size of your show, that might be one person or it might be five or six. The amount of PPE depends on how big your team is, how much your unit needs to move around, and how much you’re able to base yourself in studio.”

“We spent what it took,” says Branagh of Covid-19 safety on Belfast. He and his team decided to maintain the frequency of testing on exterior locations, even with a reduced chance of virus transmission outdoors. “It didn’t make straight-up-and-down financial sense, but it made sense in terms of feeling we were doing everything we could to be vigilant about the virus, and so that everybody understood what was going on. Clarity of information is key in filming in the time of Covid-19.”

The unifying thread among all projects was a willingness to get going after a hiatus of several months. “Although the work we do is by no means an essential service, entertainment has been very important to people in lockdown,” says Branagh. “We were supremely glad to be reminded of how privileged we are, and how precious it was to continue to do it.”