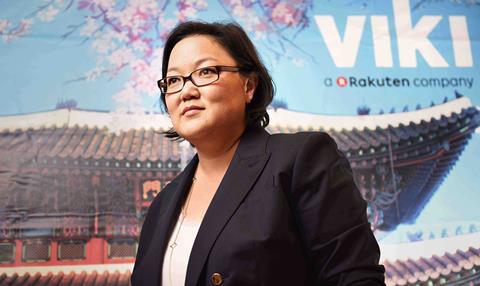 One of the big promises of the digital era is that streaming services will enable a more diverse range of content to cross borders and find new audiences. But is this really happening? After all, subtitling is expensive and faced with an overwhelming array of options, viewers may eventually just decide they want more of the same.

More so than even the global SVoD giants, US and Asia-based streaming service Viki.com is proving that content can not only travel, it can motivate a worldwide community of passionate fans. Viki streams TV dramas and movies from all over Asia and Latin America, which are subtitled by the site’s fanbase into more than 200 languages. The site clocks up monthly viewership of more than 1.5 billion minutes and the fans have subtitled more than a billion words for 5,000 shows.

Viki CEO Tammy H. Nam, who has been with the company since 2011, explains that the site’s viewership is mostly based in North America, Latin America and Europe, but the content is not just reaching a diaspora audience – for example homesick overseas Koreans binging on Korean dramas. “Most of our viewers are not native to the content,” Nam says. “We have Europeans watching telenovelas and in North America we have Caucasians and African-Americans watching Asian shows.”

Founded by a trio of Stanford and Harvard business school graduates, including current executive chairman Razmig Hovaghimian, Viki was originally conceived as a YouTube-based language learning tool, until the founders saw that the content people really wanted to subtitle was illegally uploaded TV shows and movies. They seized on an opportunity to start licensing this content when prices were still low.

“The company started out with a crowd-sourced, community-based model versus a streaming media model, so the company culture was always geared towards the fans,” Nam explains. “We’ve always talked to the fans, listened to the fans, and they’ve been great at helping us figure out in advance what will be popular and where the trends lie.”

But the crowd-sourcing concept does not mean shoddy subtitling – the fans take their work extremely seriously. The community organises subbing teams around each show, handing out short sections to hundreds of viewers, while another round of fans checks for consistency, accuracy and tone. “A new on-air show can be subtitled within hours of broadcast – the fans take a lot of pride in the speed and quality of the subs,” Nam says. “In fact, it’s widely acknowledged among fans of Korean dramas that Viki has better subs than anyone else on the internet, including from the broadcasters themselves.”

Acquired by Japanese e-commerce giant Rakuten in 2013, Viki has remained fairly autonomous with headquarters in San Francisco and offices in Seoul, Shanghai and Tokyo. The site started out in 2010 with an advertising-supported (AVOD) model, but last year introduced an SVoD option, Viki Pass, which is ad-free and gives fans early access to new shows.

And like its SVOD rivals, Viki has also stepped into the production of original content. Already streaming is a series called Dramaworld, about an American college student obsessed with K-drama, who gets transported into one of her favourite shows. Currently in development, Five Year is based on a story by The Walking Dead creator Robert Kirkman about a family living under the threat of a deadly meteor headed towards Earth.

Viki also recently announced a collaboration with Korean talent agency iHQ on three web series starring talent such as Lee Minhyuk from K-pop group BTOB. It’s the kind of fast-paced, idol-driven content that works well with the millennial generation, which has grown up on a diet of YouTube videos.

Nam explains that the thinking behind most of these web originals is that they’re a cost-efficient platform to showcase up-and-coming talent. Viki can then leverage its massive fanbase to take that talent global: “It’s an opportunity to do a lot of experimentation to see who resonates with the audience and who has potential to make it big in their home country and beyond.”

She continues: “We’re seeing this blurring of the lines between who is producing content, what is considered premium, who is discovering talent and how popular it can become. The Asian and Korean entertainment industry especially is extremely talent driven – fans are hugely influenced by celebrities. And what we’re seeing is that there’s potential for some of these shows to become even more popular than the highly-produced, much more expensive content that is shown on broadcast TV.”

Producing content is also a smart move at a time when the number of online platforms is proliferating and acquiring TV dramas is becoming much more expensive. There are also some territories that are just not selling their content; Viki has tried and failed to secure Turkish dramas, which are popular across the whole of the Middle East. When asked about Japanese content, Nam says that Japanese broadcasters will license their TV shows, but have onerous post-acquisition requirements. They’re also not innovating as fast as TV producers in Chinese-speaking territories and South Korea.

Nam believes dramas from mainland China will be the next big category to pop, so has recently struck deals with China’s Huace Media and Huana Baina Film & TV. “Our Chinese watch time has grown 300% in the last couple of years,” says Nam. “The quality of Chinese shows is increasing and they often feature stars from Taiwan, Hong Kong and Korea. We can help that content travel, not only through subtitling, but also the socialising that goes on within our communities.”

The next step for Viki is to increase the number of countries it licenses content from and, despite the short attention span of its young audience, the company is also looking at acquiring more feature-length films. “We’re looking at what kind of movies are going to be popular and the country of origin,” Nam says. “The movie audience tends to be slightly older than viewers of TV dramas, but this should help us expand the source of our content. We’re finding that certain countries might be better at making movies than they are at TV.”